Please, sir, can we have another Group Build?

heck.. would just imagine 'Resin' with the general guideline being that the item should be in the most part a resin item..
or resin/multimedia..
Top

I am sitting here at work on what is a public holiday for the rest of my fellow Melburnians. Actually, it is THE public holiday that has so many scratching their heads in disbelief, Melbourne Cup Day. Yes, we get a day off for a horse race that usually lasts less than 4 minutes. Go figure. Anyway, enough of that. It's lunchtime and I'm doing what any good 1/144 scale modeller should do under the circumstances ... visiting the forum. And, with suggestions already coming for GB8, I've looked at those end dates for GB6 and GB7. So here goes ...

GB6. In building terms, we added an extension or two, resulting in an eventual end date of 15 October. OK, since that was, ummm, a few days ago, I am calling for advice as to whether it's time to lock down the thread. As F_IV and nils still have active builds in GB6, I thought it only fair to get their feedback first. What say you, lads? If so, the tally for the GB was 8 build threads, 9 completions, putting it just behind GB3. OK, that’s a polite way of saying “last” but we always knew the topic would be outside the aviation eras many of our members work within. And admit it, I bet there were a few WW2 enthusiasts who thought “Mark I Gladiator” or “Eduard Avia B-534” then baulked at all that rigging stuff! For those of us who did participate, I think it proved challenging but ended up a most rewarding experience. Not sure if I’ll build another biplane for a while (and I do have nine Avias in the stash), but that’s just me.

As for GB7, the current end date sits at 12 November (and this was a subtle extension to the original end date in October). Current standing is 9 build threads and just the one completion, ajmm’s beautiful Toucan. I can only speak for myself and say that, up until Thursday, I was working on a strategy for dealing with the decal disaster that befell my Canberra, the Kingcobra was progressing OK but adding the MiG-15 UTI was always a bridge too far. The whole shebang certainly is now as complications in my life have completely isolated me from the Man Cave. Can’t go into specifics but any modelling pursuits are on hold until further notice. And, for once, it is not because I’m in hospital again, because I’m not!

So, with my plans up a certain creek, what does everyone else think? Extend to the end of the month? Into December? Remember, we can always overlap any new GB if members want to get stuck into something unrelated to Vietnam. Methinks the “resin kit” suggestion is a good ‘un because it allows entries from all eras and, of course, covers any subject whatsoever – aircraft, AFVs, spacecraft, figures, aliens, etc.

Sorry to hear you're at work on Melbourne Cup day! Hope you get some day in lieu at least...

I'm keen to finish off my two Vietnam Era builds - so an extension would be most appreciated!

I don't have any resin kits in the stash - closest I have are some gashapon and one vac-form.

I am making painstaking progress on my Spit. I chose it because it’s a familiar subject so hoped that would speed the build. I’d appreciate an extension as well, and will continue in another thread if that doesn’t quite do it.

Shall we take a renewed poll on the next GB? In the interests of boosting participation.
Top

in regards to the Vietnam GB, i dont think i will be able to finish my F104 in time due to circumstances, same reason i couldnt finish my biplane GB project, SV.4b.

as soon as the new GB is announced, i can get a good fresh start as i will have some more time available by then.

As you will see if you visit the Vietnam GB, I have extended the end date to Sunday 10 December. Hopefully, this will allow those of us participating in it to complete our current entries and not be resigned to the Shelf of Shame. Actually, I may still end up on the infamous Shelf given current circumstances but that's another story. Unfortunately, the sun has set on GB6 and the thread is now locked. Forever.

ajmm wrote:Shall we take a renewed poll on the next GB? In the interests of boosting participation.

Stream of consciousness stuff. Watching the progress of some of our master modellers on this forum either completely revamping crappy kits or starting from a pile of plastic card and brass rod, a thought for a future GB - "Scratchbuilds". As Merlin said, these things should not only be fun, they should also develop our skills and push the odd boundary here and there.

I could add "Vacforms" as another possibility, but I can visualise said Merlin having a Johnny Nice Painter meltdown ...

I had wondered about scratchbuilding as a subject. In many respects making a model from scratch in 1/144 is much easier than gilding your average Crown or Minicraft abomination. I've only got one successful scratchbuild under my belt so far, but I would only need a nudge to have a crack at some more.

That 'stream of conciousness' is leaking out of your ears, Matey!
Try cotton wool.

I hear you and, given the challenges of scratchbuilding, I'd be more tempted to suggest a more general GB theme, but with the proviso that some scratching should take place and be suitably illustrated by the usual plethora of images. This would allow a spectrum of scratching, from simple cockpits and scratched conversions, through to full builds.
A statement of intent could be made by each participant, to try and ensure thatsome actual scratchbuilding does take place. 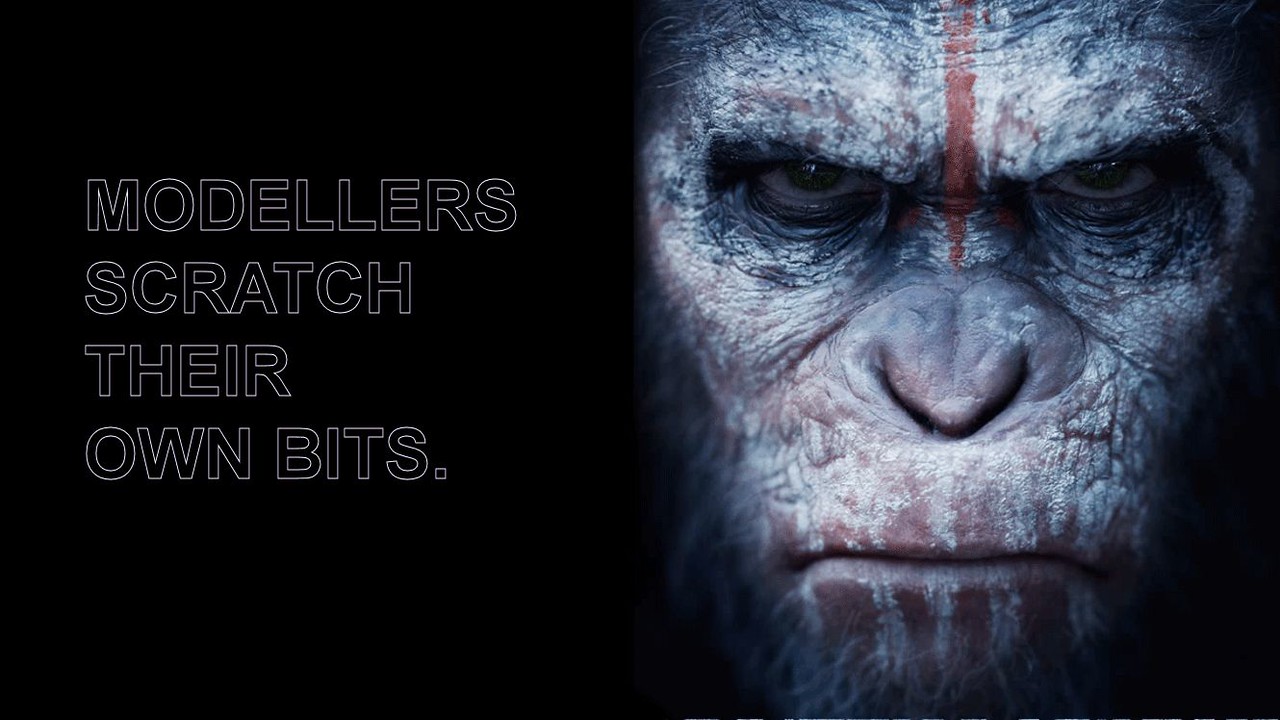 They wait for me in the woods, you know!
I can hear them now, giggling...
They're hiding under the weasels!