If you are not sure where to start posting, here would be a good place!
Post Reply
85 posts

Watched the Sunrise this morning obscured by volumes of smoke thrown up by bushfires 15km away to the SW.

The sky is thick with smoke and you can smell it. Spent part of yesterday mowing some of the dead lawns to mulch up the leaf litter from strong winds in these parts over the past couple of days (hence bad bushfires).

Looked at the empty bench and at the stash and found little inspiration. Have some Bandai Star Wars Super star destroyers on order so waiting their arrival. Must get some Platz/Eduard 1/144 A-4 Skyhawks for a flight deck dio with a couple of Sea King choppers - saw an interesting SEA camoed one online. would contrast well with a normal Vietnam era USN grey/white scheme.

Must think harder on the A-4 Sea king dio.

Keeping fingers crossed regarding that bushfire, Ian. We were staying with friends in Golden Grove near Adelaide in January 2015 when what became known as the Sampson Flat bushfire started. Indeed, I was driving back from a model shop (!!!) when I noticed the large plume of smoke and was shocked when I realised just how close it was to our friends' house. The early morning of the 4th was one of the scariest we'd ever endured, as we'd been advised that evacuation might be necessary. Fortunately, due to a wind change, the fire front veered away from Golden Grove and we were put on a "watch and act".

Back to the present. My weekend was cold, wet and miserable (a definite contrast to Queensland) but SWMBO still had me slaving away in her garden. By the time I got home, I was too knackered to lift a modelling knife! Still got hopes that I can get back to the 262 before the cessation of the GB, but my multi-hued P-36C project is definitely on hold. Realistically, whilst I will set up the poll code for GB12, it is most unlikely I will vote or participate. First time for everything, I guess.

In the meantime, keep posting these great photos of your weekends. Says he, enviously.

Righto, Weekend 14-15 Sept. Pressed the plunger on the AFV 1/144 Sea King and have commenced some paint work on the internals.

also spent some time working on my board wargame creation with the working title Panzer Ace Ost.

Ohh, the war game looks an interesting project! Is it your first go at designing? I still have some of my old war games like Panzer General, ‘88’, Memoire 44, and the ultimate one Europa Fire in the East.

I have just survived a 20 year reunion since graduation from medical school 4 day weekend in Adelaide . 56 out of 62 Australian graduates turned up and two international ones out of the 11.
Regards
Peter
Top

Hello Peter,
Yes it is. Been involved in a couple of proof reading and 'sanity check' projects of a US wargame designer, in fact, the first game is about to be released. It's been a lot of fun. Thought I'd have a crack myself. Did some playtesting with a very good mate and he quite enjoyed it. Still have to completely write the rules and I am constantly tinkering with the design as the rules are still at an 'extended detailed sequence of play' stage. Took up boardgaming in the mid to late 70's migrated to computer stuff in the 90's and came back in the mid noughties. There are some excellent Solitaire designs out there. That's an excellent attendance effort. I suspect it was a lot of fun.
Ian
Top

Interesting - I’ve never thought of that before.

I spent our (hopefully) penultimate weekend minus newborn infant attending other toddlers’ birthday parties (cue: thousand yard stare and Marlon Brando’s voice offstage: ‘if you could see...The horror, the horror’). Got some proper work time in and have almost finished a French Algerian Cessna Birddog and a NASA T-38 Talon, plus made great strides on a SEA camo Starfighter (even if I have somehow lost the rather large tail).

I’ll post some pics when I come up for air this week.
Top

ajmm wrote:... made great strides on a SEA camo Starfighter (even if I have somehow lost the rather large tail).

You must have one helluva big Carpet Monster!

Well this weekend we have the grandchildren with us today and I have model club tomorrow where I might see Mike (Bootneck42). So today Grampsie helped Joshua and Charlotte build there first models. (I now the kits are not 144 but you've got to start somewhere!)

I have finally made a start on my airport diorama. I copied out the basic layout onto 18 x A3 sheets, pasted them together and laid the whole thing out on a 6ft x 4ft board. 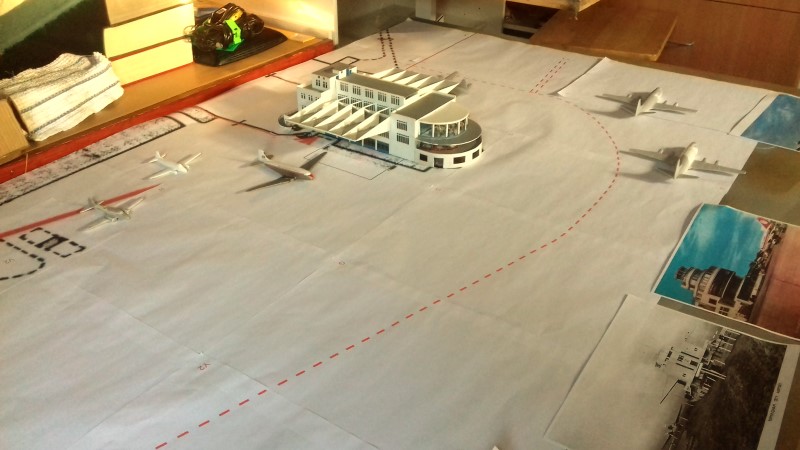 The airport terminal is almost complete but I am at a stage of needing to decide in which era to finish it. It is currently in a 1950's setting. If I advance to the 1960's then a new control tower needs to be added above the restaurant. Into the 1970's the balconies (the half round structures) need to be extended forward and be fully enclosed in glass. Also, the new International departures building would need to be added to the Western side.
The terminal ceased operations in 1984, when the new Birmingham International Airport was completed on the other side of the runway. 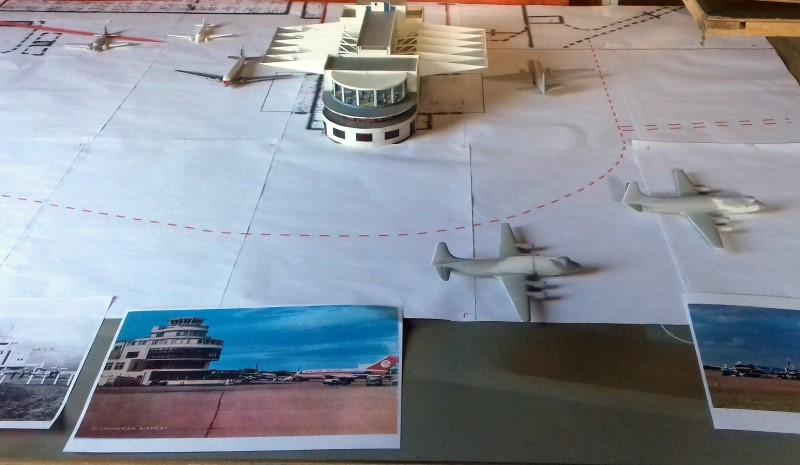 All the aircraft on this draft layout are those found on actual photographs in those locations. Eastern side of the terminal L to R: Anson I (scratchbuild), DH104 Dove (WM), DC-3 (Minicraft). The dark grey shape on the paper behind the Anson and Dove, is the position for one of the three hangars. 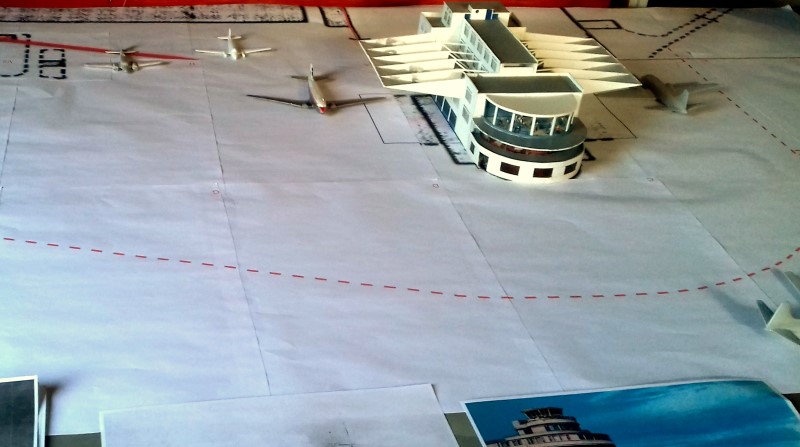 As can be seen above, there's still lots to do; on the terminals, the airport surroundings and, of course, the aircraft. There's also the airport service vehicles to be found, anyone know of sources for these? I've found Russian/East European ones but not British stuff so far.

I intend to be at the meeting David, see you there.

Users browsing this forum: No registered users and 6 guests