If you are not sure where to start posting, here would be a good place!
Post Reply

I’m also working on the very same Beau, although no prizes for guessing whose will be more accurate, better detailed, more subtly finished and generally look 1:48...! The colour below has come up oddly - I think because I was photographing right next to the Christmas tree.

They are nice kits. Ive tried to keep the invasion markings on mine as you can see - laziness! I built one a while ago and they do finish up rather nicely, I thought at the time.

Otherwise a pair of Vampires, the last stages of my Blackhawk and Aardvark have kept me out of trouble this weekend.

Hope to see more of your beau before too long!
Top

Great looking pair! I'm still doing bits here and there on various projects, so we'll see how it goes.

I put a bit more time into my on again/off again scratchbuild of the Pfalz D.IIIa over the last day or so. Adding some inlets and outlets, plus the circular inspection panels and locations for the cabane struts. The raised panels are painted decal film, cut out using the end of a sharpened piece of brass tube. Probably the most useful thing I took away from the Sparrowhawk build.

I spent much of last weekend working on getting the deck markings masked on the Ark.
The markings were already drawn with pencil and it was just a case of masking off those locations. This totalled over 50 masks and taped lines! 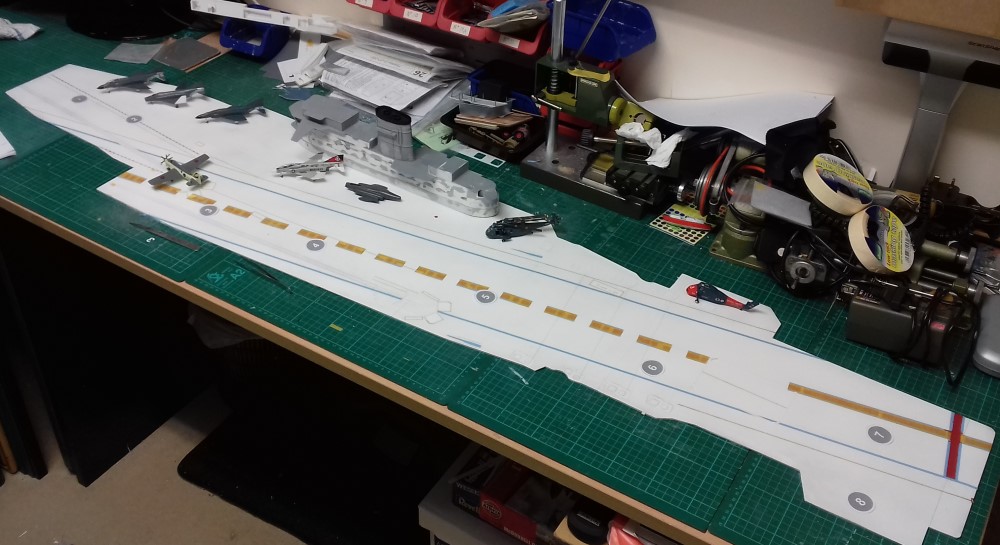 Next came the decision about which era (ship's commission) to depict. I needed to decide at this stage as the helicopter landing spots were in different locations for each commission; plus the white lines also changed during subsequent refits.
I chose to portray the model as for Ark's sixth commission (the first with Phantoms) from 1970 to 1973, and proceeded to test out the landing spots with paper photocopies. 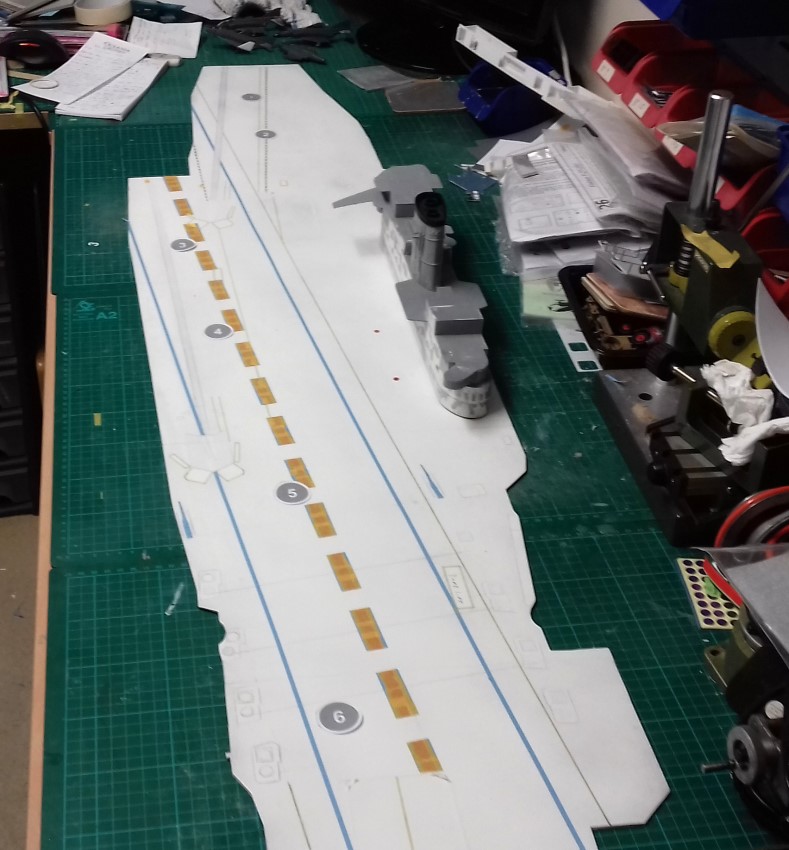 Once I got those spots positioned correctly, I made some stencils and positioned them in place of the photocopies. I also produced a stencil for the large 'R' which goes at the aft of the deck. 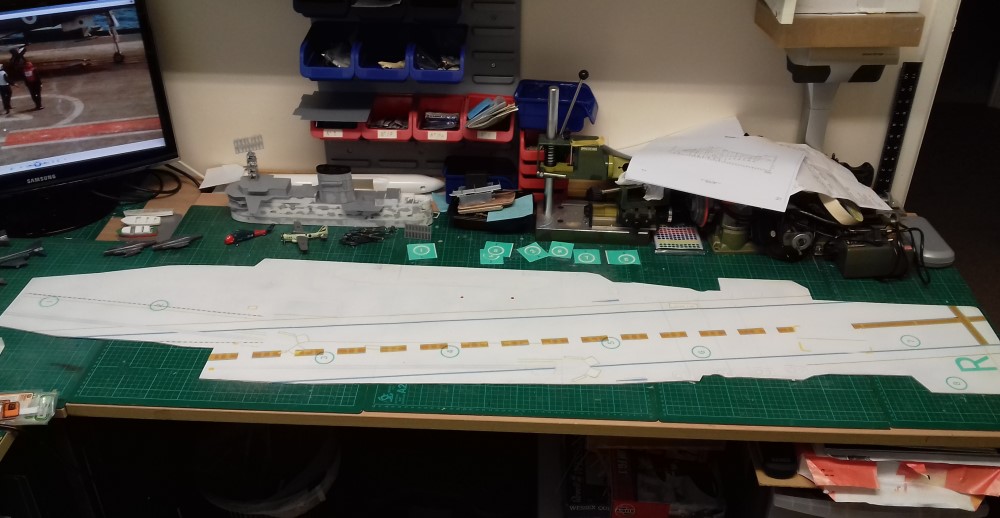 Then it came to painting the flight deck over the masks. Hopefully the tape will come away to leave the white, and red, lines once the paints have dried.
First task was to give the deck some rust, grime and weathering under the grey top coat. On real flight decks, the greenish dirt and reddish rust comes to the surface from below, so spashes of Olive drab have been sprayed randomly onto the deck. 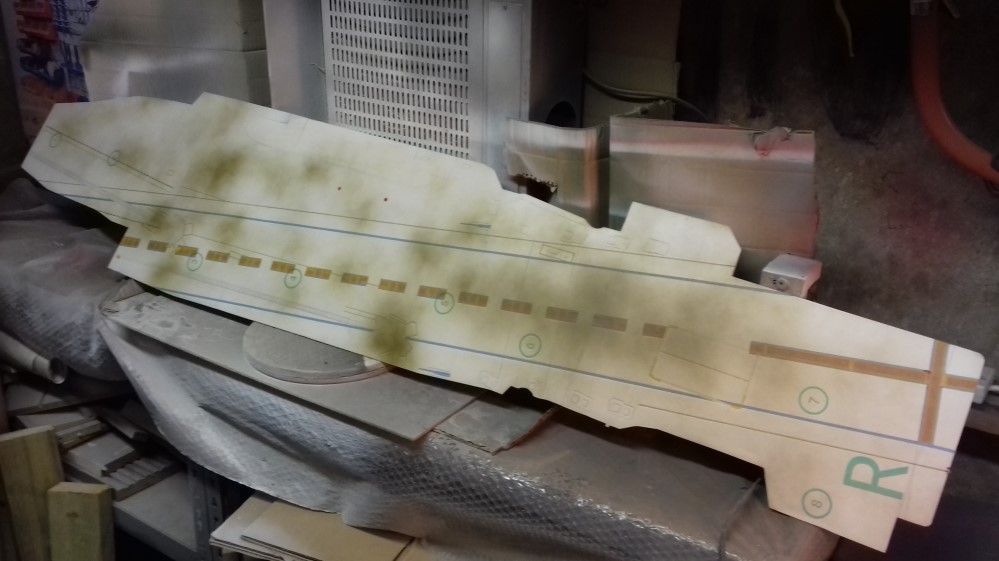 After that came the grey top coat. 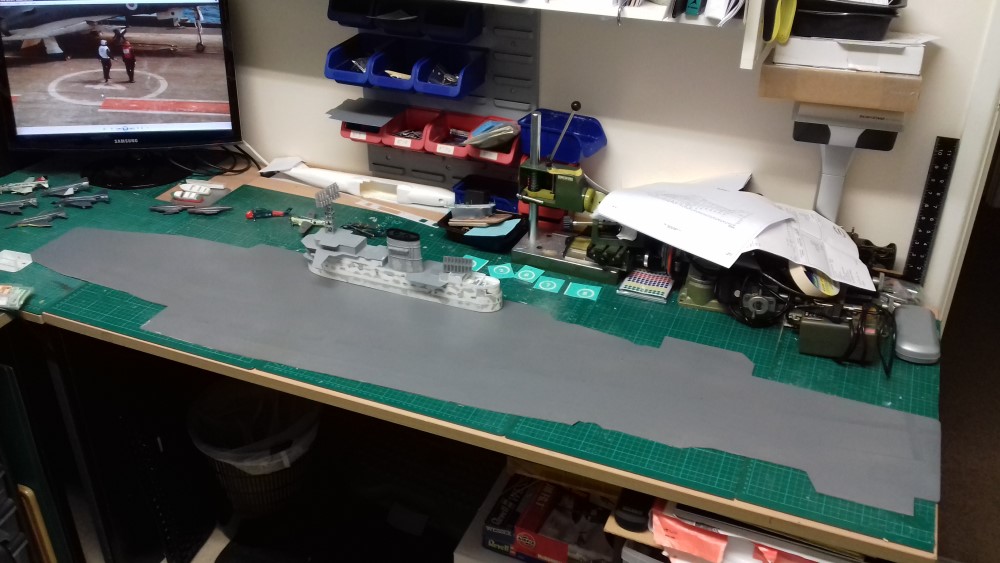 and then, finally, it was time to remove all that tedious masking and stencil production............. 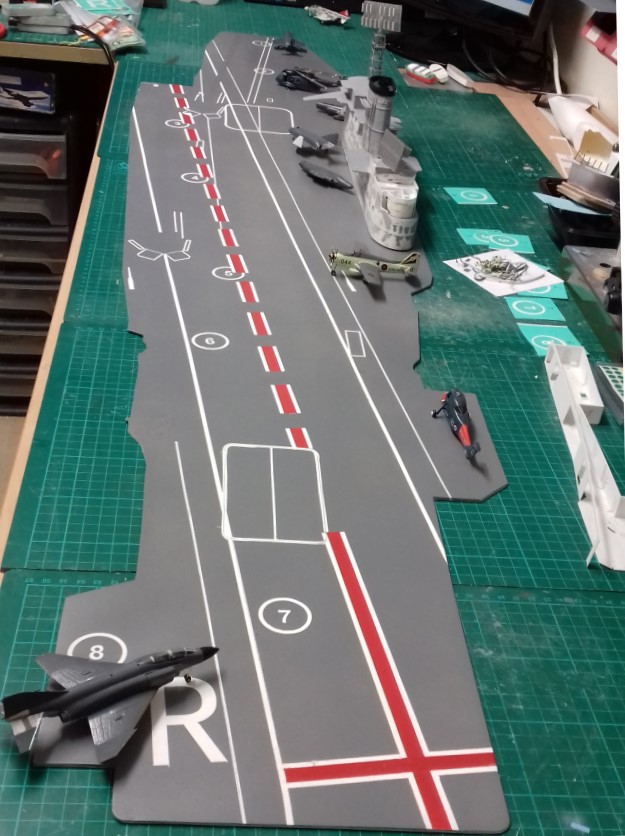 All this looks beautifully smooth and clean which means I shall have to do a lot of weathering later to make the effect more realistic!
The large R will get another stencil produced later, that one will be for the red insert within the white outer R.


Next weekend will be taken up with enhancing the island. It needs a lot of pipework, decking, masts and radars adding. 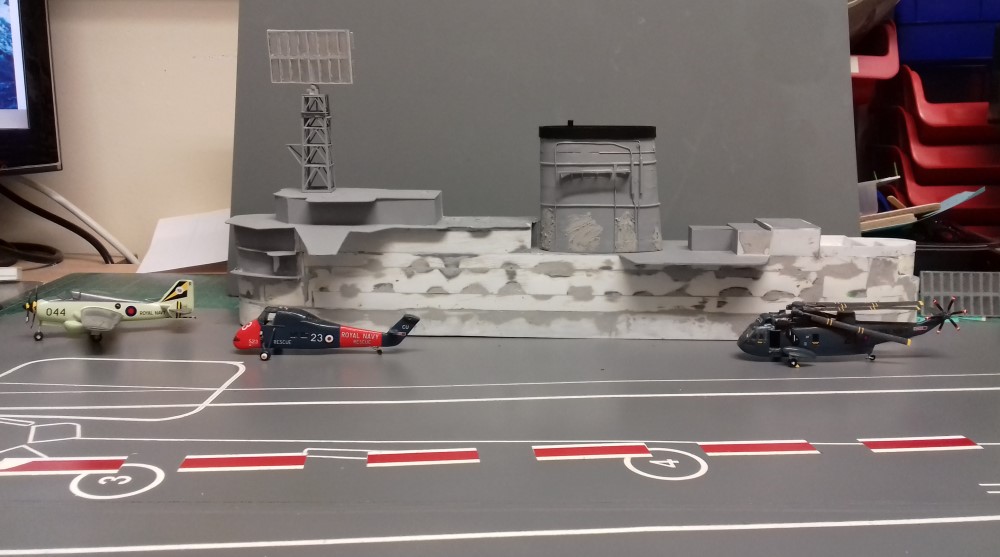 This is all going to take a fair amount of time to complete this build, which should give someone time to produce a 1:144 plastic kit of the Phantom FG.1. ARE YOU LISTENING OUT THERE??

Goodness mike. You have been busy. That is truly amazing. I get it was satisfying unmasking! Beautiful - can’t wait to see more.
Top

Great masking. to have so many masks including circles and no paint bleed through, well done.
Regards
Peter
Top

Thanks Angus and Peter.
To overcome the problem of bleed through, I gave the deck a light spray of clear varnish first. If there was any seepage then it would be clear and not noticeable. It seems to have worked and so I shall use this method on my masks when brush painting as well. 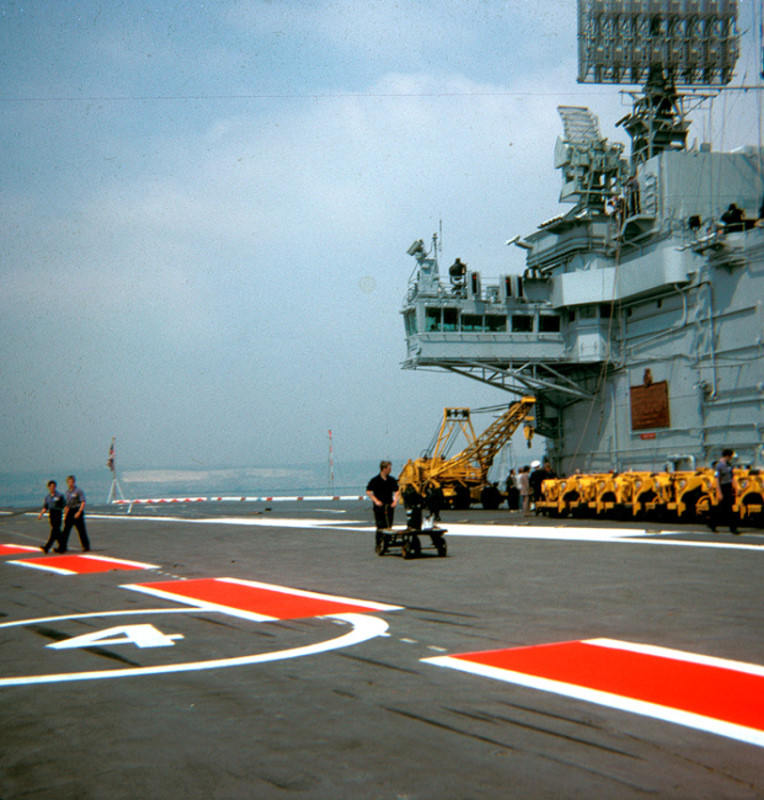 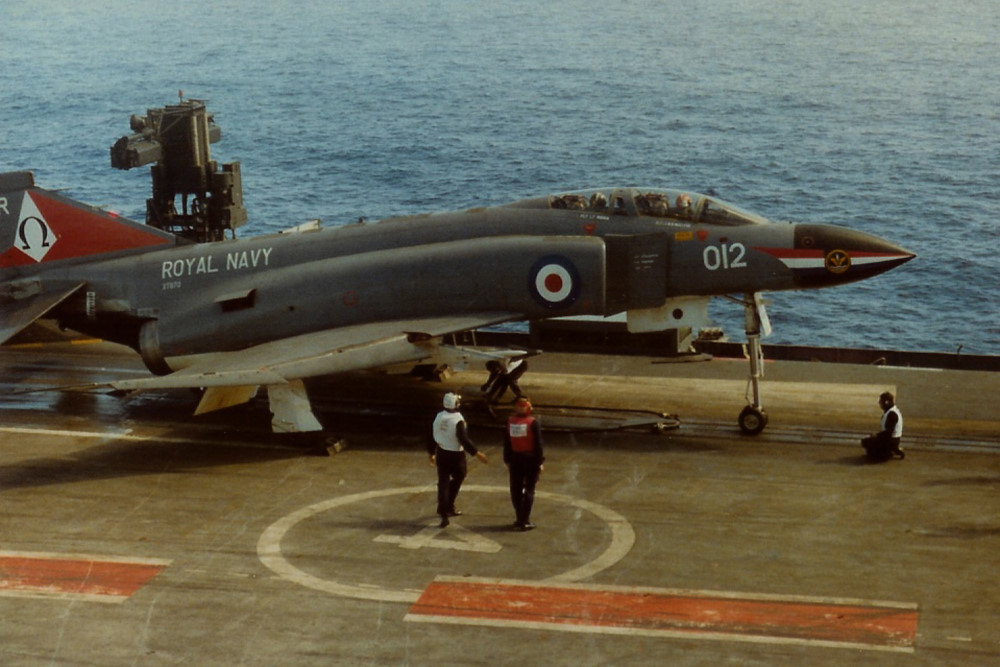 Mike, you must have more masks than Zorro and the Line Ranger! Is the aircraft lift already cut out? Nice to see some progress on this mega project.

I hope to come to Weston on Sunday.

This weekend I finished my Mi-6 from Eastern Express. Only need a plate and little bit sunshine for pictures.

This weekend has been mostly dedicated to the Ark again. Here you can see that I have weathered the flight deck, which has toned down those garish colours. 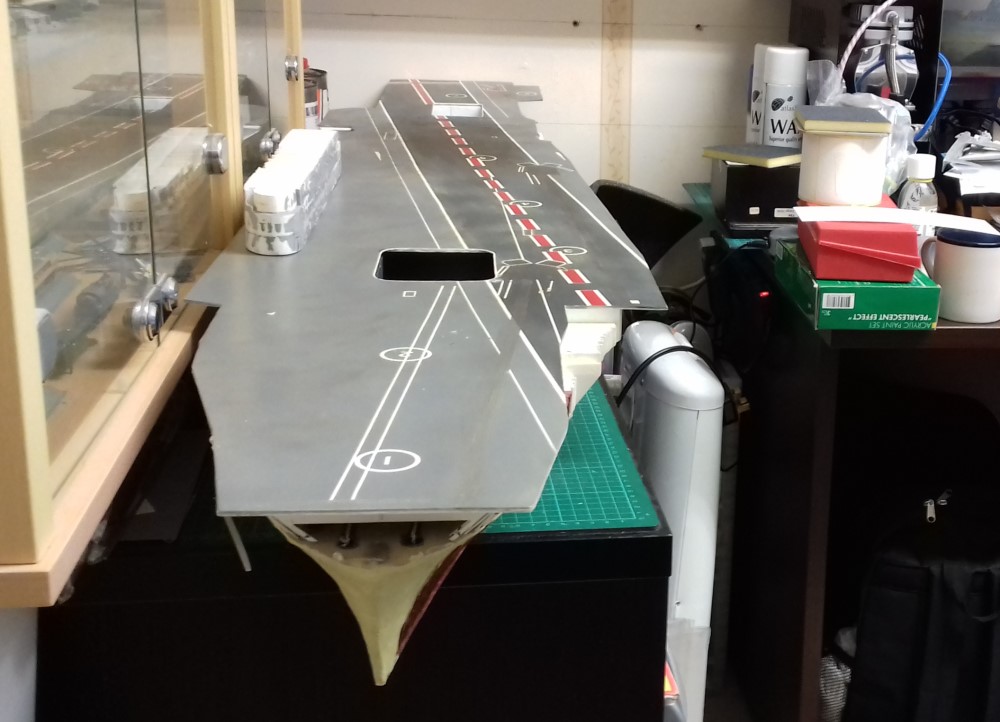 This view show the weathering to better effect. Also, some projected builds to enhance the model. 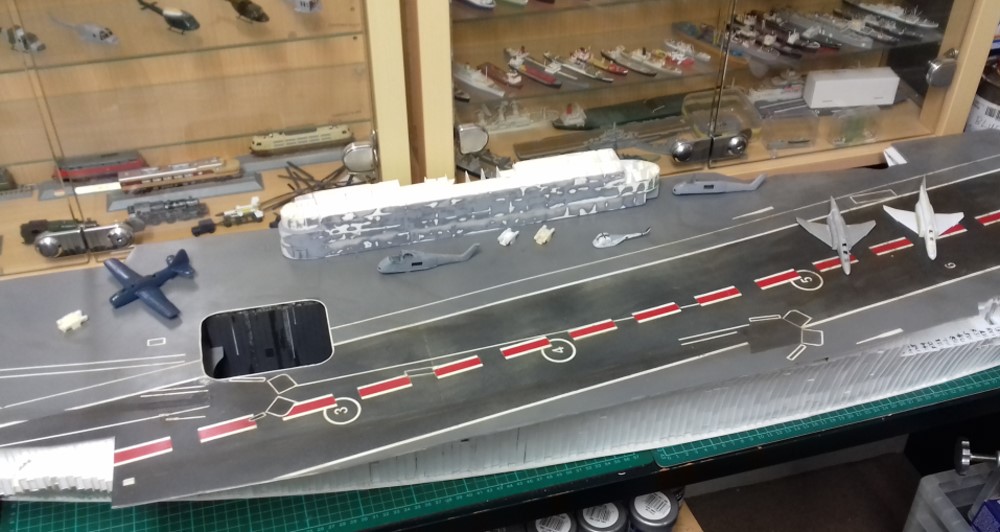 Just for David, I have opened up the lift wells again. The Gannet COD (WiP) is a rework of the WM Gannet AEW. 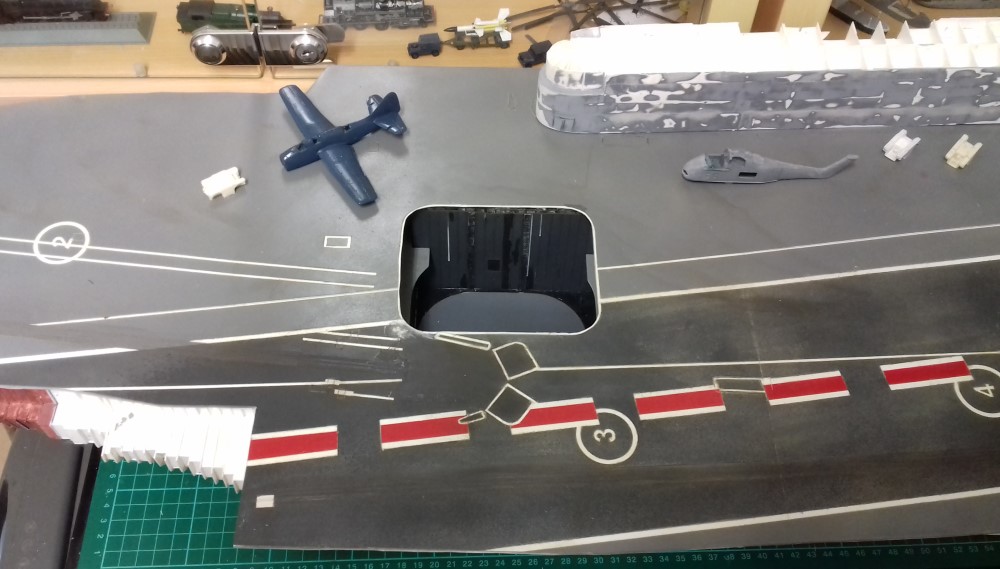 You can see why they moved spot 6 to the starboard outer area in the following refit, it is on the touch down location and gets worn very easily!
If only someone would produce a plastic kit of the Phantom FG1 or FGR2. 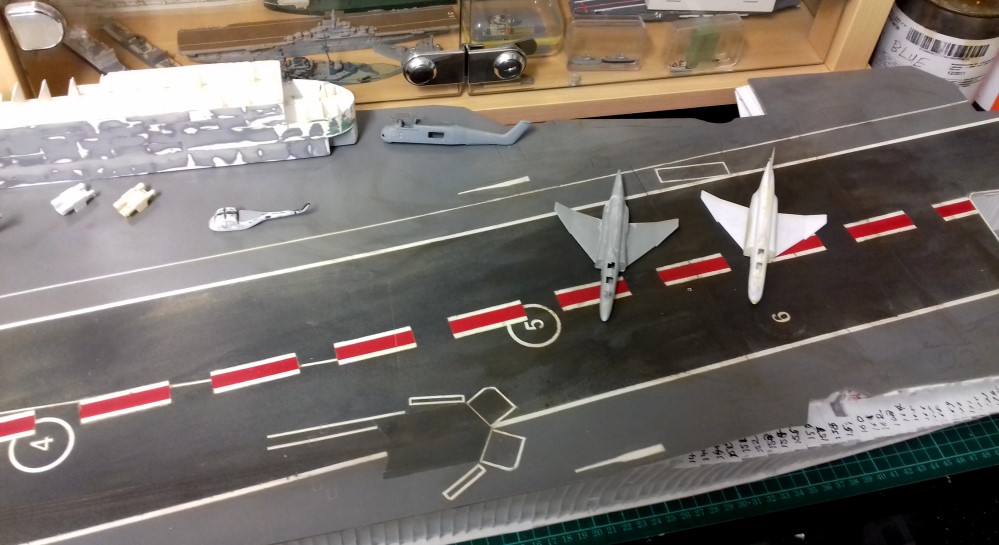 I have decided to rebuild the Island structure completely, I wasn't happy with some of the details; plus I have learned a much more about scratchbuilding since I started this project.

Mike
All for one and 144 all
Top
Post Reply

Users browsing this forum: No registered users and 12 guests