For the discussion of aviation and aircraft subjects. If it flies, it goes here!
Post Reply
55 posts

Post it notes made the masking very untaxing. I really do want to replace the canopy next time. Looks even clunkier in photos than it does in the flesh but still.
Top

Brilliant! Aluminum areas nicely contrast with yellow paint. Especially like the pic on the green grass base. More like this please!

ajmm wrote:Post it notes made the masking very untaxing. I really do want to replace the canopy next time. Looks even clunkier in photos than it does in the flesh but still.

Angus, I'm getting into the habit of smash moulding the canopy of all my more recent Anigrand builds using the kit part filled with superglue as the template. Admittedly, all have been relatively simple shapes (predictably, the Type 432's was the easiest of the lot), so I can't give you an example of where this approach doesn't work yet. As I mould my replacement directly over the original, I do lose the framing as this obviously appears on the inside of the new part. In my case, no big deal as I usually do my decal strip framing afterwards.
OTB ...
GB13 - Late 298 (Aeronavale), Bf109E-3a Strela (Bulgarian AF), ČKD LT vz.38 Praga (Slovakian Army)
Shelf of Shame - F-100D-20-NA (Don Schmenk, USAF), Me262A-1a/U4 (Prototype), Ju87B-2 (Hungarian AF)
Top

Sorry David - only just saw this. Kirby Cadet? Now that sounds like a scratching challenge.

I've added another to this thread, but I didn't do a WIP - I forgot. This is Mark1's really quite lovely kit of the LET L-13 Blanik which I picked up off eBay for the eye-watering sum of £2.50, even if one of the two in the box was missing!

The Blanik is not exactly a combat glider, but this thread has broadened anyway. It is, however, the most numerous and widely-used glider in the world; not bad for a 50 year old Czech design. So a thread of 144 gliders would surely be missing a trick without one. 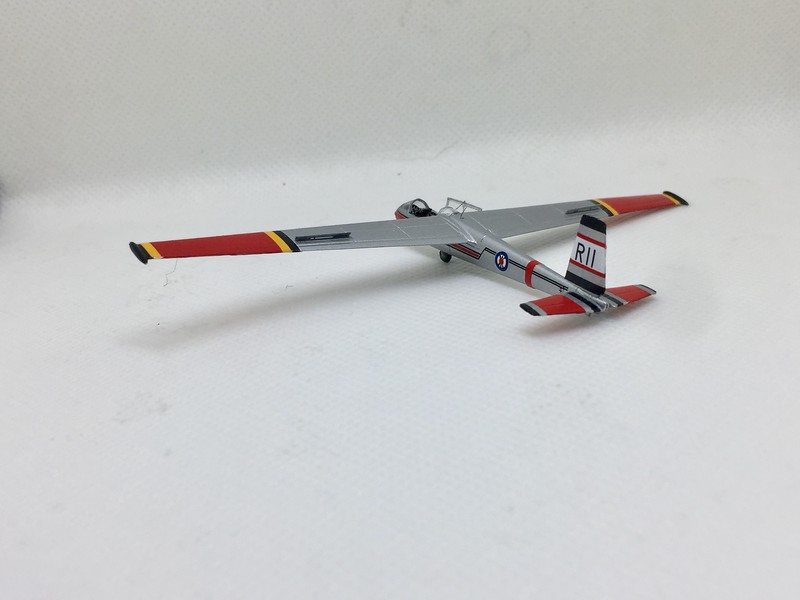 It was designed in 1956 by a small Czech company and is still widely in use today, including with the USAF and a host of other air forces. I decided to use the excellent kit decals for an RAF Gliding Association Blanik that was competing in an international competition in Scotland in c.1980... 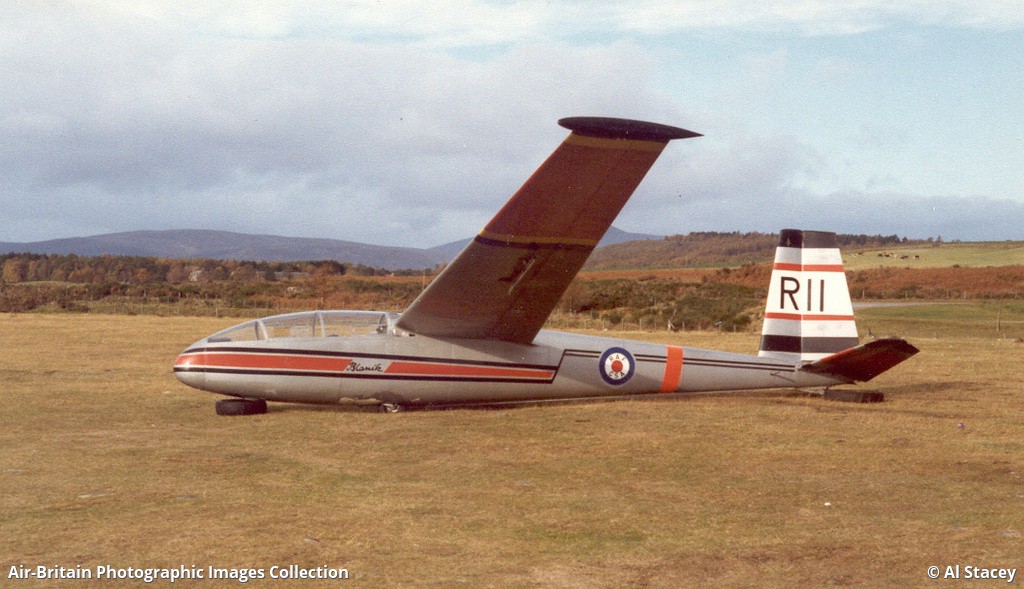 During the cold war, it was widely used throughout the Soviet bloc countries competing in international gliding championships. Its success in these competitions (and a fair few world records at the same time) helped it secure a strong foothold in the export markets of Western Europe, North America and Australia. 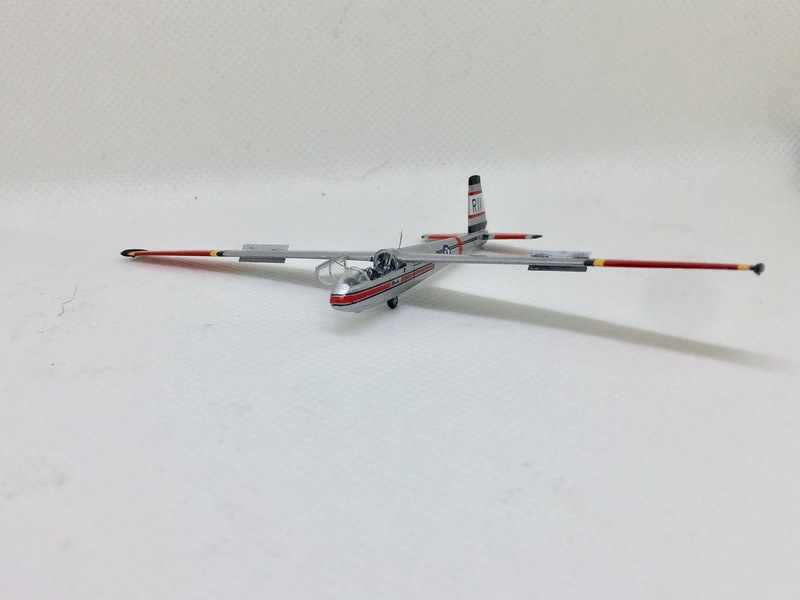 It is, I think, a supremely elegant glider. Even if I've gone and ruined the beautiful lines of it by opening the canopy and whapping out the airbrakes. 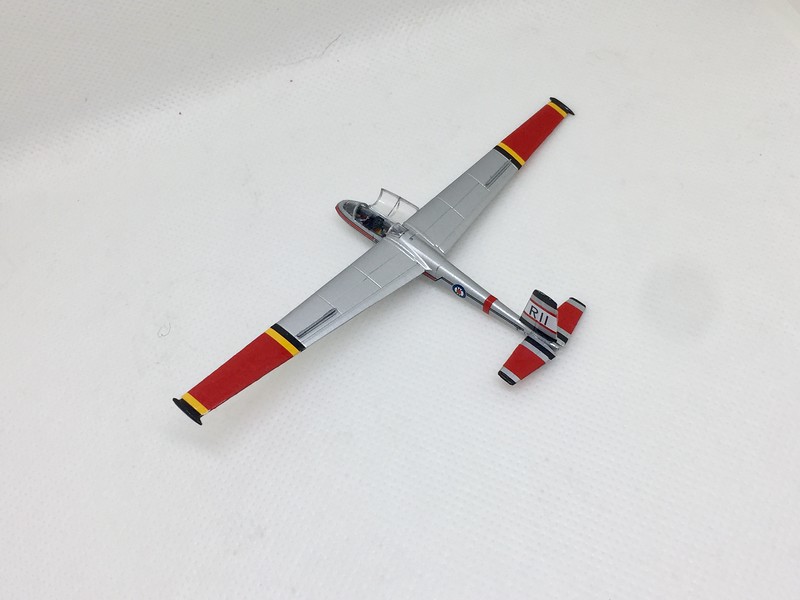 Possibly because I picked it up at such a bargain basement price I thought I could splash out on the (really quite good value anyway) Brengun etch set. This was a joy to use and very comprehensive. Best of all, because my bargain only included one of the two kits the box usually supplies, and the Brengun set provides for two gliders, I had spares and even though the carpet monster was well fed. Happiness all round. 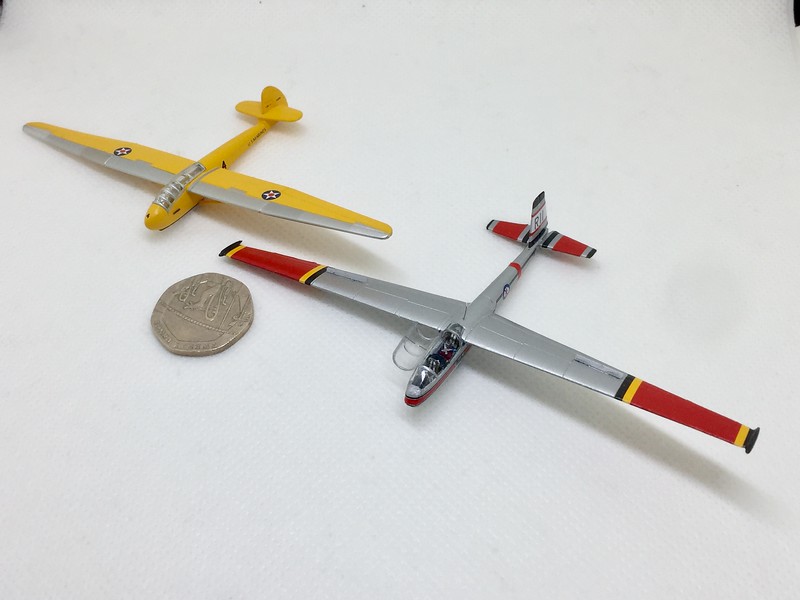 A very quick and really quite simple build. I used Tamiya aluminium from a rattle can and basically all the other colour came from the decals, though this did need some touching up with vallejo paints.

Thanks for looking. I think a more substantial and combat-ready glider is coming up next.
Top

That definitely looks the goods. Must get one to try and replicate the Blanik my bro learnt to fly in. Actually, it looks like an impressive little kit.

This thread has lain dormant for a little while. I found a glider near the surface of my stash so thought I'd revive it briefly - gliders are very uncomplicated to build so quite within my limitations at the moment. 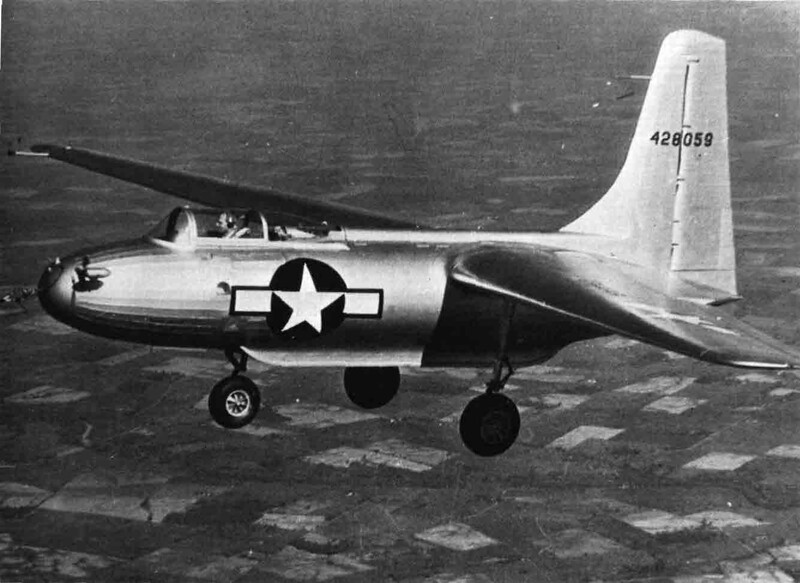 This is the rather unusual Cornelius XFG-1. 'F' as in Fuel (as opposed to 'C' as in Combat - yes this thread took a left turn at the traffic lights some while back!). 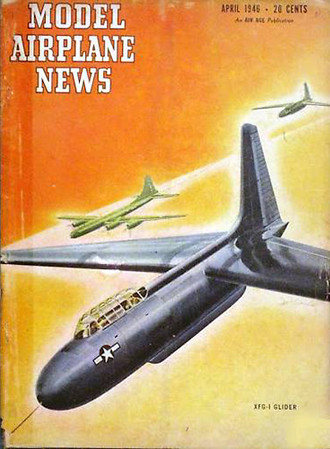 A fascinating concept - this was to have two missions - either as a way of delivering fuel to combat troops on the front line as a manned glider (you'd really want to get your landing approach bang on if you're riding two tons of gasoline!) or - more intriguing still - as what would effectively be a pilotless winged drop tank. Towed behind a B-29, the idea was this would extend the range - once fuel transfer from the glider to the Superfort was complete, the glider would be cut loose. In the event, the bloody seaborne slog through the Marshall and Marianas Islands provided enough operating bases for the B-29 close enough to Japan that this was never called for.

As a design (and particularly as a glider design) this is remarkable on two counts - the very obvious forward-swept wings and the tail-less-ness (ness). George Cornelius had become fascinated by variable incidence and forward swept wings in the 1920s. I am a bit hazy on quite what the aerodynamic advantages are, particularly in a transport glider which doesn't really need the high manoeuvrability forward-swept wings are most associated with - my sense it was about less drag and getting more lift from a smaller wing. The XFG-1 was certainly able to be towed much faster than other contemporaries - at 220kts.

Made largely from plywood and fabric, two were built and NACA took a keen interest in the test programme. Sadly the first crashed when it went into a flat spin which the pilot was unable to recover from. Forward-swept wings are particularly vicious in the stall - with the rearmost section of the wing (the section nearer the fuselage) being the most high-lift and the forward sweep meaning it tends to tighten into a spiral dive. The concept of the fuel glider was abandoned in 1945.

This is a very simple kit which comes with the Anigrand Sikorsky VS-44. 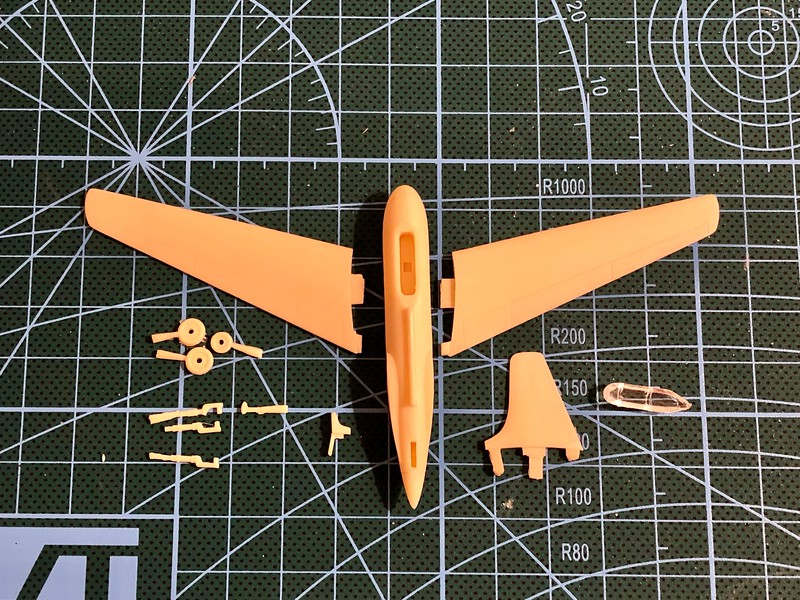 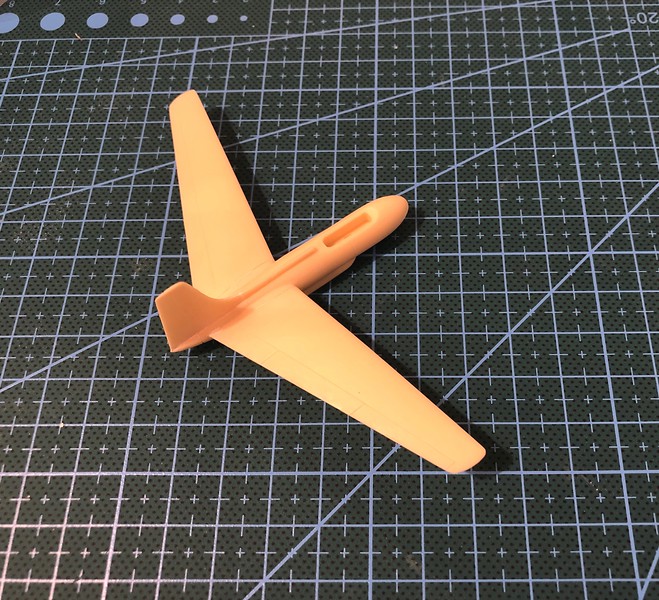 Some primer did reveal a small moulding seam to clear up on the fuselage and a smidgen of filler was needed at the wing roots and tail/fuselage join, but nothing tricky.

I went with Vallejo Metalcolor acrylic paints. I know the finish is not as good as my usual AKI Xtreme metals, but in our new place and working from the kitchen table I cannot yet crack out the smelly lacquer stuff. 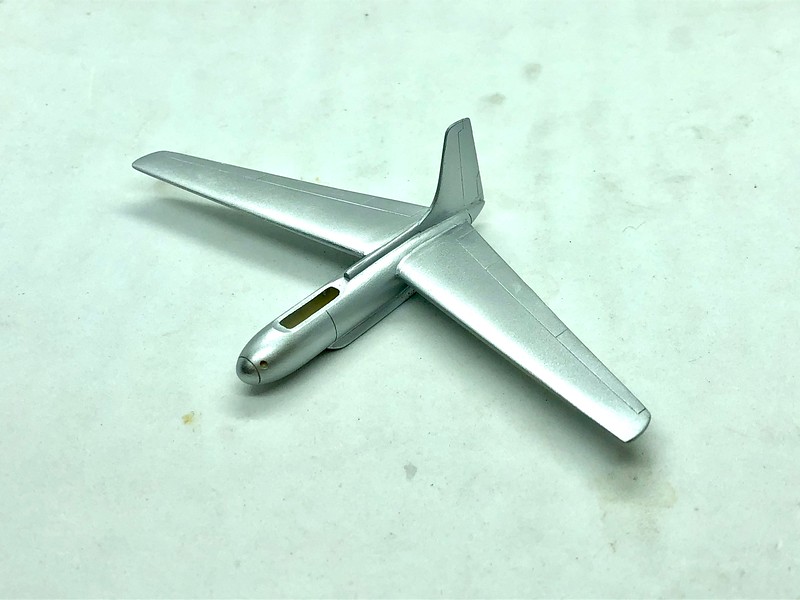 As an aluminium dope colour, to the naked eye the Vallejo finish is actually fine even if (as others have observed on this forum) it appears quite rough in photos. 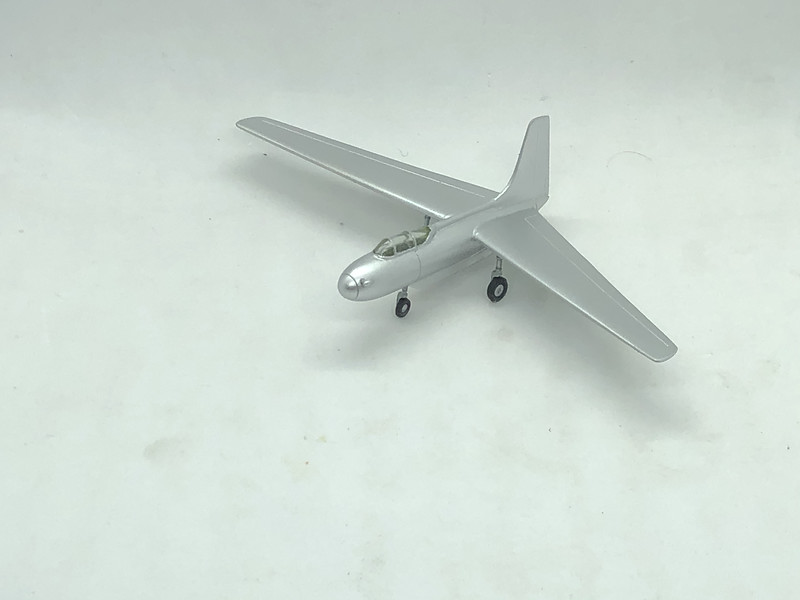 Canopy fit was good, although the canopy itself was dreadnought-armor thick (I did the bare minimum of interior decoration). Undercarriage assembly was pretty simple. Only four photographs of this aircraft exist (plus another of the first prototype crashed which doesn't really count). Two of those on the ground show very different attitudes - the ones of it on the ground above show it very nose high...This one less so...

I went with the former for no other reason than that was what the kit-supplied undercarriage legs wanted to do.

Pretty soon this was done...

As a last step, I added pitots (two by my count) and the tiny windmill turbine propeller on the mount on the nose. 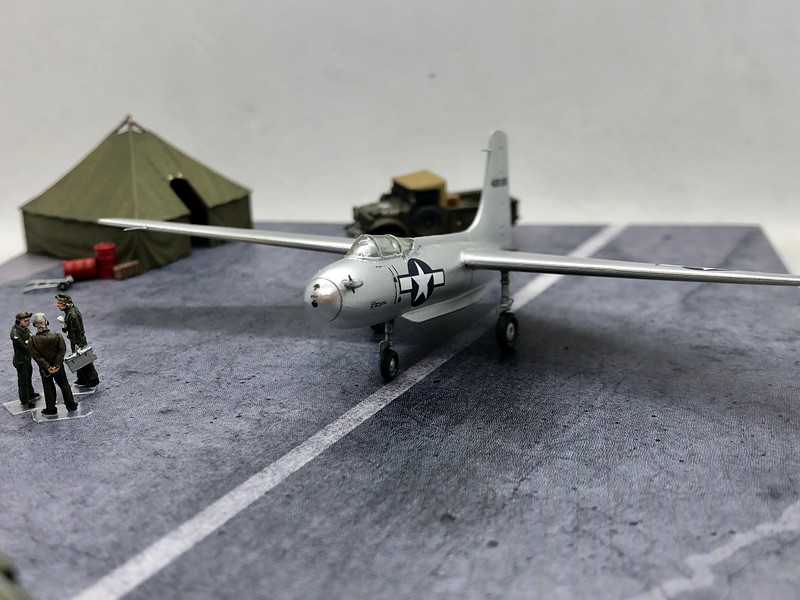 Anigrand provides the serial number for this (which I cut in two to get across the rudder line) but I used Mark1 insignia (thinner).

I added a few other details - what looks like a window below the cockpit on the right side and a scalloped foothold on the port side of the nose, plus towline attachment points on the nosecone.

After a bit of tidying up this was done.

A nice enough build for a few evenings' work. I'm pleased with the result and look forward to getting this on the shelf with the other gliders. 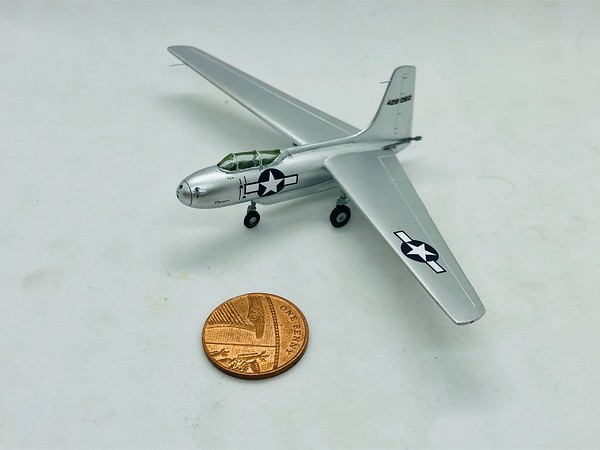 It's actually quite a small thing... 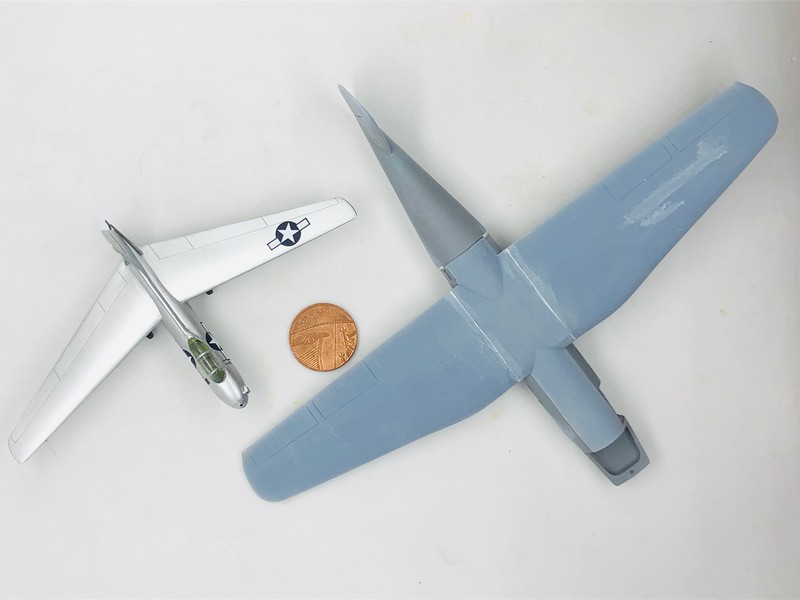 Next - I really am going to summon the bravery to try and crack this 3D printed Horsa. I've made a start anyway. 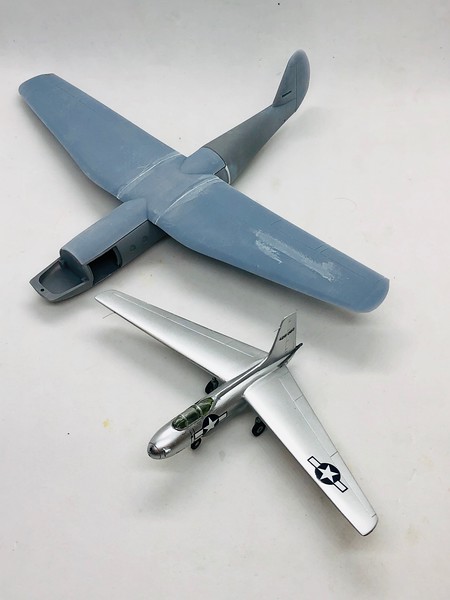 I feel I may be nearing the end of the line for this thread (without scratch building that is). It's certainly going to get more challenging from here... By my count I've got a WACO Hadrian to do (Miniwing) and convert a DC-3 into a glider (Minicraft). I should also I suppose have a stab at making a Chase XCG-20 thingy out of the Amodel C-123 Provider. I suppose if I can get hold of the old wargaming resin kit of the Hamilcar then I could have a swing at improving that. Any other ideas?

Thanks very much for looking!

What an odd-looking little thing! If it wasn't for the wingspan, everything else is as far removed from a glider as you can get. Another gem for the display cabinet, Angus.

Excellent build and wonderful mission-specific display! I luv it. Responding to a question that popped up earlier in the thread, I would bet that the idea behind the forward swept wing was to place the wing's main spar aft of the fuel tank payload. Trying to make a tank light, strong, and tight would be made much more difficult if it had to include a spar carry-through structure. Just a guess, because speed and/or maneuverability wouldn't really be specified.
Top
Post Reply
55 posts