Ii usually get a brass rod and a small wooden base from crafts stores. Also, my Brother-in-law does some wood working and has now and again provided me with small wooden bases. They're usually about 3" X 3" or there about. The brass rod I 'shine' with steel wool and then clear coat. I re-enforce the interior of the kit before I build it. So when I drill the hole to accept the rod there's something for the C/A glue to get a grip on.

The Ikea Billy bookcase is my weapon of choice, great value for money and very good dust and UV proofing as well. 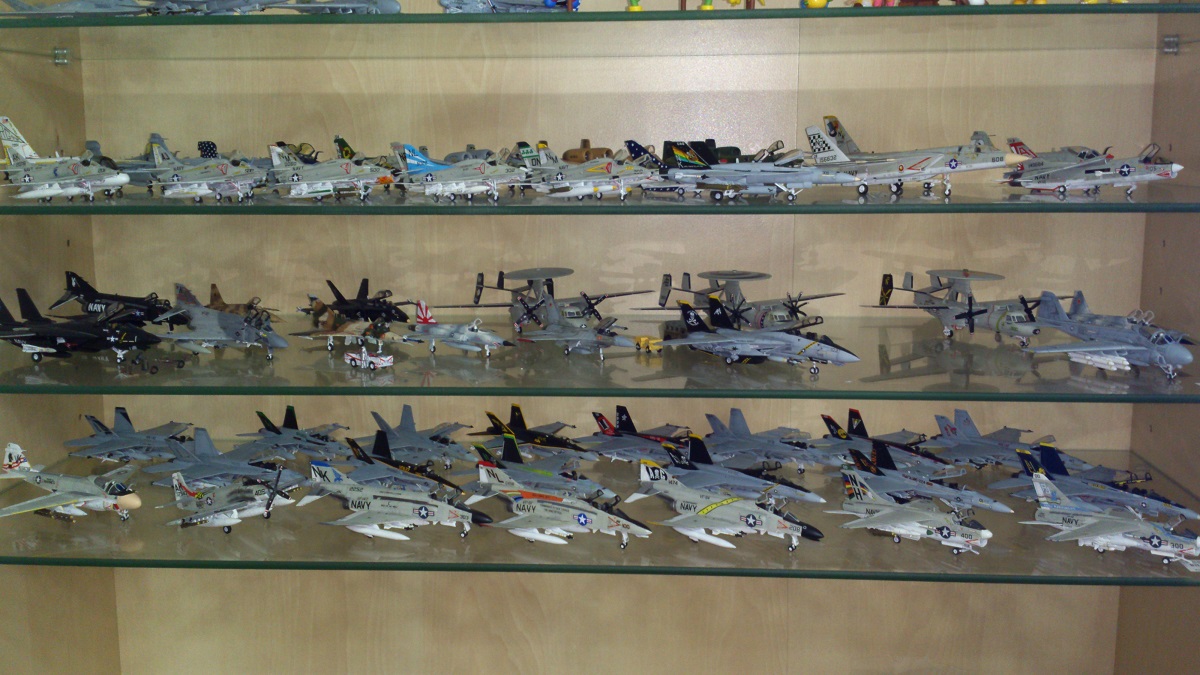 I'm revisiting this thread after deciding the fate of my three Bertby cabinets now that I've moved into a rental apartment. The long-OOP Bertby literally bolted to the wall, an absolute no-no with landlords. I did play around with ideas to convert the three cabinets to free-standing units but kept encountering issues with stability, exacerbated by the narrow depth of the beasts. Open the glass door and it requires a tonne of counterbalancing to stop the whole shebang toppling over. I even had this idea of building each one into a Billy bookcase and was examining the feasibility of the idea at my local Ikea when the thought came to me, "Why not simply sell the Bertbys on evilBay or Gumtree and go with some Billys?"

With glass shelves readily available for the latter at the same price as the wooden ones ($AUS10 each), the decision was made. Three 40-cm width Billys purchased, each with a Morliden clear glass door. True, I can't secure the top of each bookcase to the wall as suggested by Ikea but screwing the three together and attaching the end one to a larger Billy loaded to the gunnels with books and there's no way these babies are going anywhere. My shelf spacing will be identical to that in Steveski's photo, which means that there is the potential for a swag of shelves (if I recall, 16 glass shelves per unit plus the wooden middle one and the base). I will stagger the cost of the glass ones over a period of time as I don't have hundreds of dollars to splash around! Oddly enough, I sought a cheaper alternative from some local glass cutters and all of them said $10 for a tempered glass shelf like this was probably 20 to 50% cheaper than they could offer, even if I'd asked for 50 up front. The benefits for Ikea from (i) mass production and (ii) Chinese labour costs.

What? You thought everything at Ikea was made in Sweden?

Should add that the Billy shelves measure 36 cm x 26 cm, whereas the Bertby ones are quite appreciably smaller at 30 cm x 16 cm. This obviously means more aircraft/AFVs/etc. per shelf. It also means that large birds like the Superfort, Bv222, Ju290, etc. fit comfortably in Billy, whereas they were way too large for Bertby. When the whole collection is moved from my former address (a logistical nightmare in its own way), I'll take a happy snap of the set-up.
OTB ...
GB13 - Late 298 (Aeronavale), Bf109E-3a Strela (Bulgarian AF), ČKD LT vz.38 Praga (Slovakian Army)
Top

Very nice Smeg - both collection and display! Your bertby units look better than mine which have very widely spaced shelves so quite inefficient.
Top

I should point out that Steveski's Billy is the older type (they've been around since 1975). In 2015 or 2016, the Billy series underwent significant modification to make them safer, particularly around kids. For one, the simple push-fit shelf supports that look like paracetamol capsules no longer fit the holes in the updated bookcases. These were replaced by things with a barb that goes into an aperture on the wooden shelf, essentially making it impossible for the latter to slide out of its own accord. When Ikea added glass shelves to the range (something I believe was driven by demands from collectors - particularly of diecast cars - to replace the long-OOP Bertby), they supplied supports that need to be screwed into the holes in the bookcase. At right angles to this, a second soft plastic screw was included. The idea is that you slide your shelf between the two ledges on each support, then secure the shelf in place by tightening the plastic screws against the underside of the glass.

Whilst it all works OK, it makes the fitting of the shelves a time-consuming business. I spent over an hour fitting the 20 glass shelves I've bought to date - that's twice as long as it took to construct all three of the Billy bookcases themselves. More annoyingly, I had to remove the Morliden glass door off the unit I was populating with shelves as the door doesn't quite open wide enough to all the shelves to be slid in place. Grrrrr!

Incidentally, totally agree with your comments about nostalgia, David. Some of those weird and wonderful bases in elderly Revell, Airfix, Lindberg, etc. kits ... ah, the memories come a-flooding back. Given Merlin's output, I'm suspecting that his Cumberland cottage was built by the same engineers that constructed the Tardis.

An update. I've dispensed with the new fashioned supports, opened out all the holes to 5 mm and essentially backdated my Billy units to the era that steveski's come from. Much easier to lift the shelves out, arrange the models, then reinsert the shelves back in the bookcases. If you are contemplating adding a Billy or two for display purposes, the time spent with your trusty drill will be well worth it. Incidentally, wrapping a piece of insulation tape around the drill bit will stop you drilling too deep.
OTB ...
GB13 - Late 298 (Aeronavale), Bf109E-3a Strela (Bulgarian AF), ČKD LT vz.38 Praga (Slovakian Army)
Top

I love Billy bookcases, we have seven in the lounge and two in my office! The four of the ones in the lounge are the narrow type and are used for books (strange I know). The others are used a display for glasses and girlie things that Christine likes on display. The ones in my office have glass doors and have models on glass shelves at the top and books and mags on the bottom shelves. All the display ones have led lights at the top so you can see the dust!
David
Top
Post Reply
18 posts

Users browsing this forum: No registered users and 7 guests