Doesn't matter if it is factual or fictional, if it's out of this world, it goes here!
Post Reply
7 posts • Page 1 of 1 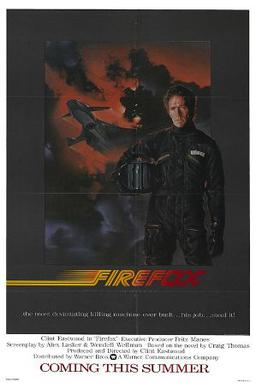 The fictional Mig-31 is as much a star as Clint...

They even built a real one (well, fictional one) for filming at Van Nuys...

I got hold of an Anigrand Firefox cheap. I'm not very interested in the Firefox itself, if I'm brutally honest, but the 144 kit comes with a Convair Delta, the prototype delta-winged aircraft that sparked a long line of Convair Deltas, including one of my favourites - the B-58.

Anyway. The Firefox. I built the Firefox. It was a pig actually. The intakes, above and below, had awful fit issues - I had to insert a lot of plasticard and used a surprising amount of filler.

The wings had locating pins but these did not align with the holes in the fuselage and there was a nasty seam to deal with.

Got there in the end though. Sprayed it glossy black, then masked off a few areas and sprayed a paler black-grey mix to get some panel variation. 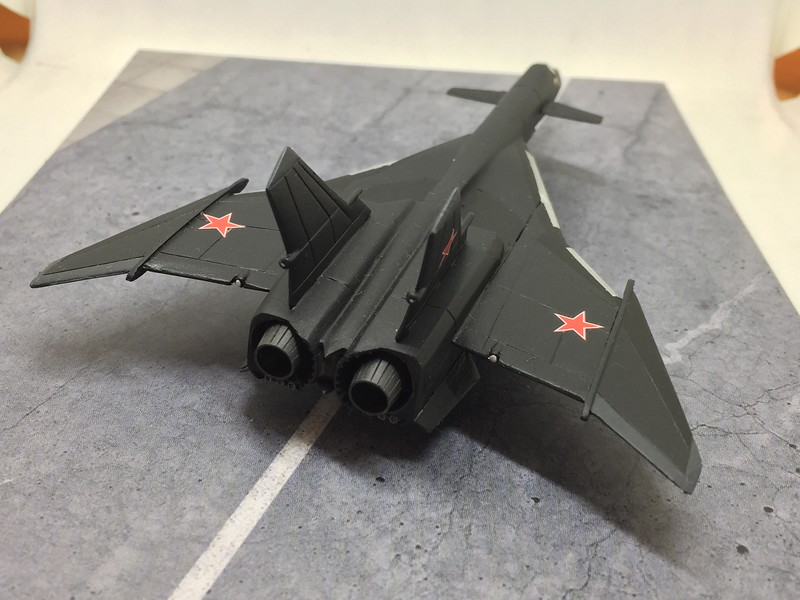 This didn't really inspire me a great deal, I'll admit.

The end result is pleasing enough. But I'm tempted to sell it on that auction site.

Thanks for looking!
Top

That's because you weren't thinking in Russian! (people who saw the movie will get that joke)

I think it's a luxury to build something that doesn't inspire. Everything in my stash inspires me so I keep moving from one thing to another and never finishing anything.

But this turned out nicely and your hard work paid off because I can't see those flaws you were talking about.
1/144 decal templates for home printing: https://sites.google.com/site/planetspe ... -templates
Top

It's a nice model because of your perseverance and the only one I have seen built up, so worth keeping for that reason alone.
Regards
Peter
Top

Thanks guys! I really need to see the film again. Haven’t seen it for ages, since I was much smaller and it was on Tv. I remember the Russian thinking thing now! I’m glad to have built this.
Top

The Firefox was one of Anigrand's earlier productions, with examples in 1/144, 1/72 and 1/48. Given your comments, Angus, I would sincerely hope the fit issues weren't scaled all the way up to 1/48 or some purchasers might be really piddled off! As it is, you've done a great job here. I recall the release of the film and thinking to myself, "Geez, what an evil looking beastie!" Of course, it is interesting to compare this with the host of MiGs and Sukhois that have surfaced in the decades following the movie.
OTB ...
GB14 - CAC CA-19 Boomerang (KdK), PZL.37 B II Łoś (Amercom)
GB16 - War of the Worlds Diorama (Pegasus)
Top

Your Firefox came out a darn sight better than mine. I had similar issues with the fit. I found a paper model in 1/144 (presented as a .pdo file so it was likely extracted from a 3D computer rendering) and had less trouble....)

However I applaud Anigarnad for their venture into the more speculative designs such as the Kamov Black Ghost, Aurora, the monogram style F-19 etc and the Stingbat. Just wish they had a go at the FA-37 Talon and the EDI UCAV from the movie Stealth, which itself was a kind of spiritual successor to Firefox (except the stealth aircraft essentially stole itself)
Top

I just spotted this. Since I normally don't look in this forum, I didn't see it. I found it during a general search in internet for it since I'll be building it in the GB14.
Despite your troubles, it came out nicely and I hope mine comes out as nicely as yours.

Users browsing this forum: No registered users and 9 guests