The elephant in the room....

David, we saw the footage. Brilliant stuff. Hats off to all the health staff, including Peter, Matt and any other of our modelling colleagues so employed. You are our front line soldiers in this battle. Thank you!
OTB ...
GB13 - Late 298 (Aeronavale), Bf109E-3a Strela (Bulgarian AF), ČKD LT vz.38 Praga (Slovakian Army)
Top

I hope everyone is safe.
I have been working from home for the past two weeks here in Germany and growing more and more worried with my family and friends in Brazil. So far, everyone is ok but I fear what the spread of the disease could do there. I had planned to spend two weeks there during the Easter vacations but we had to cancel it. Postponed the tickets to August and depending on how the situation evolves will probably need to postpone again or cancel altogether.

Here in Germany, my family is fine although my wife is very frustrated. She is a surgeon but she is not allowed to work as a doctor here yet. She is still waiting for her diploma recognition and the authorization to practice medicine in Germany. We hoped that with the crisis they might have accelerated the process but it seems to be the opposite. On the other hand, I have to say I am selfishly relieved that she is not working in the front line right now.

During the week I have been working a lot and I have not been doing much modeling lately. I thought that spending more time at home would increase my modeling productivity but it has not, unfortunately.

We are very lucky as we have a large garden and can potter around there. The weather for the last six months has been wet so there are a lot of jobs to do. Just as the virus hit the weather changed and the grass grew, the first cut took all day and produced a cubic metre of cuttings. I'm trying to fit in some modelling time too.
Stay safe out there.
David
Top

Locally people are putting teddy bears in their windows so that children walking for their exercise around the streets can go "On a Bear Hunt". As we live on the edge of the village and our place is set back we have volunteered Trevor for an important task. Trevor is going to sit atop of our garden wall for the children to see. Over the many years he has lived with us, over 20, he has got a little weatherbeaten. To prepare him for this onerous task he was given a coat of white primer, a misting of Humbrol dark earth (Rattle cans) Tamiya Deck tan, Humbrol Trainer yellow for the paws and ears and a misting of gold highlights! Detailling consisted of Revell 30, gloss bright blue for his eyes and Tamiya X1 black for pupils, mouth, nose and paw detail.

This afternoon a coat of gloss varnish to protect him.

I know for those in Ox, NZ, France, USA and Italy (OOPS Holland too) will have chosen different markings for their native bears!

Ox? The Wizard of Ox?

Yesterday has been the first day of lessened movement restriction.

City parks heve been reopened, we can go visit parents and relatives and many (not all) shops are open again (still no restaurants, hair dressers, etc): as there is less control, let's hope everyone behave responsibly in order to avoid another virus spread that would waste all the benefits brought by the sacrifices of weeks and weeks of isolation. We will know in about two weeks.

I've celebrated having a four hour walk around the city center. It has been a wonderful day and there is still very few people around (and no tourists at all).

A quiet, still empty Rome in Spring: amazing. I thing I'll go for another city center trek next Saturday: once in a while, I like to be a tourist in my own city.

It must be an amazing sense of freedom to be able to go out again after the level of constraint and lockdown.

Walking around the semi deserted city much be north ereie and serene.

Definitely worth taking some images of the great monuments without all the tourists.

Hopefully everyone behaves and the Rt ratio remains low.

Enjoy your time on the streets!
http://kampfgruppe144.blogspot.com/
Top

Wonderful pictures. If only we could all have health too.

Best wishes to all our friends.

The empty places are fascinating and beautiful, although the underlying reason is quite the opposite. Thanks for sharing.

Yesterday was Dutch remembrance day. Usually, the Dam square is packed with people, now only the king and queen, prime minister, and a few others were present. King Willem Alexander held quite an impressive speech. 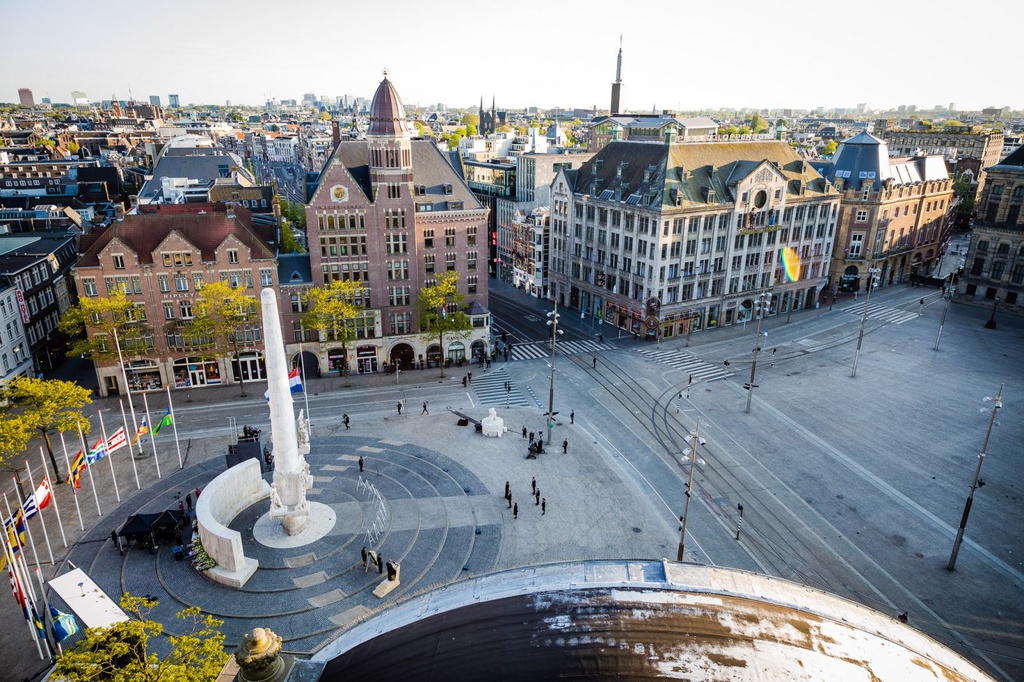 Today we celebrate liberation day, normally packed with festivities. Although this is our wedding day, I would have gone to my customers anyway because of a busy schedule. Turns out miss customer has a confirmed coronavirus, and I get to spend the day with my family after al. Although I use all the precaution measures possible, this still feels like a near miss.

What gorgeous photos from Italy and the Netherlands! Thanks for uploading these. And Lex, given your health situation leading into this crisis, we're all so delighted that you are clearly safe and well.

The situation in Australia is that various States are gradually lifting or reducing restrictions, albeit where I am in Victoria, most remain in place. Indeed, we are still deep in lockdown, awaiting the go ahead to move about a little more freely. We were tracking well until an abattoir worker who'd injured himself visited a Western Suburbs' hospital, somehow contracted the virus and shared it with his workmates! Authorities were quick to act on containment, so believe they have that one under control. Oddly enough, I Skyped with a former fellow postgrad student who lives with his wife and son in Astoria in Oregon, and they had a very similar incident - again with workers associated with the meat industry - last week. Go figure.

Whilst there's been a lot of pain in terms of loss of freedom, loss of employment (for over 1 million Aussies since March), loss of salary for many others, etc., we - like our friends across the "ditch" in New Zealand - have been largely spared during the pandemic. We were being given numbers like 50,000 fatalities "best-case" scenario, and 150,000 if things got out of control. The current toll is 97, which is quite remarkable. As my fellow Aussies would agree, we are indeed, the Lucky Country.
OTB ...
GB13 - Late 298 (Aeronavale), Bf109E-3a Strela (Bulgarian AF), ČKD LT vz.38 Praga (Slovakian Army)
Top
Post Reply
36 posts

Return to “Pull up a seat”