Add your "What if" whiffry and modelling mischief here. From Luft 46 and other "paper" projects to your own crazy ideas and off-the-wall creations, rehashes, etc.
Post Reply
9 posts • Page 1 of 1

A couple of years ago, I was helping my mother pack up and move out of her house. While going through my old room, I re-discovered a box that contained a bunch of models I built back in the 1980s and 1990s. I stashed the box at my mother's house before heading for a 3 year assignment in Europe and forgot to collect them when I returned to the US. I took some quick photos of some of the models before packing them back up to take with me. This is one of those models.

Introducing the F-14 Tomcat in service with the Royal Air Force. This is a Revell F-14A Tomcat with decals from the kit and a Revell Harrier (if my memory is correct. The Harrier was painted up for another country). The inspiration came from reading an article in a then current aviation magazine stating the Royal Air Force had considered purchasing the F-15 Eagle or F-14 Tomcat instead of entering into a contract to develop the Tornado. The article did not provide any concept photos but still inspired my teen-aged mind. This was back in the mid-1980s, before the age of the internet and an international network of like minded researchers and their sources of reference pictures and helpful suggestions. 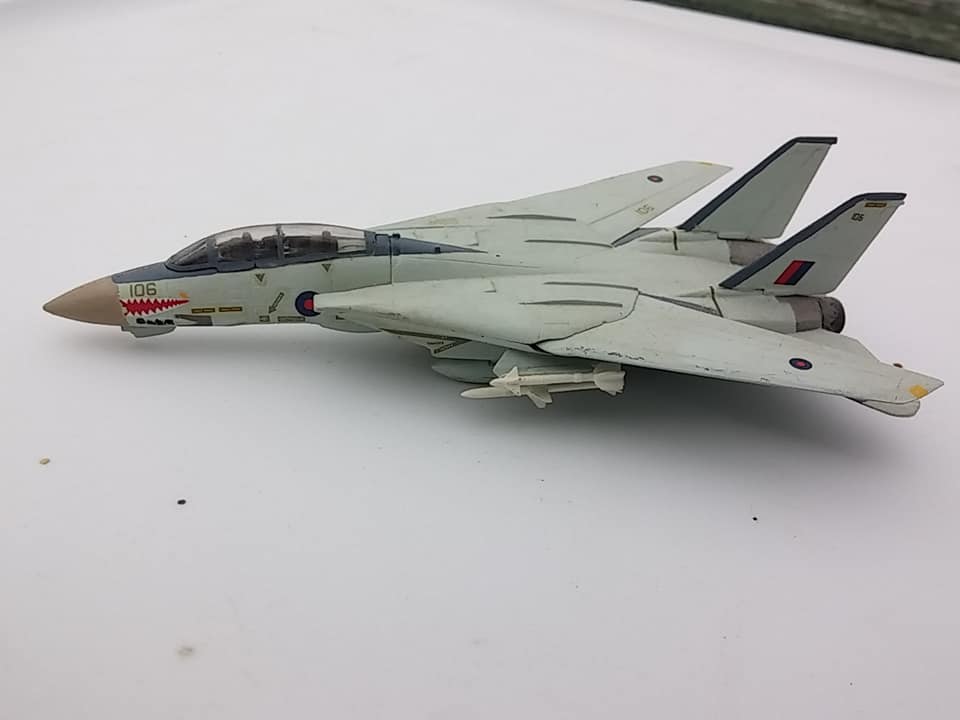 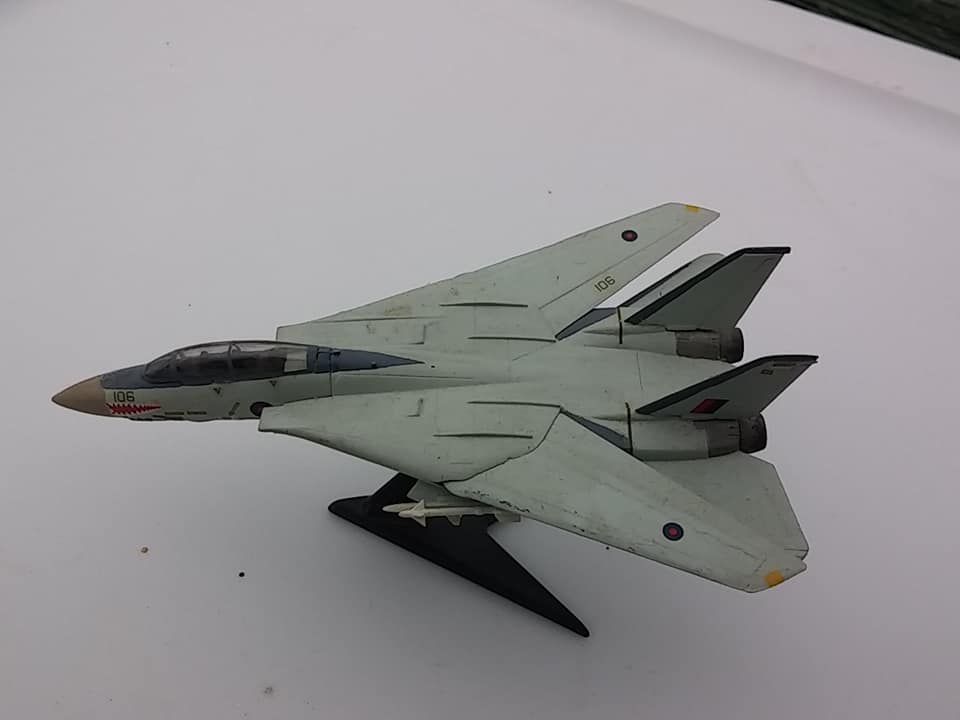 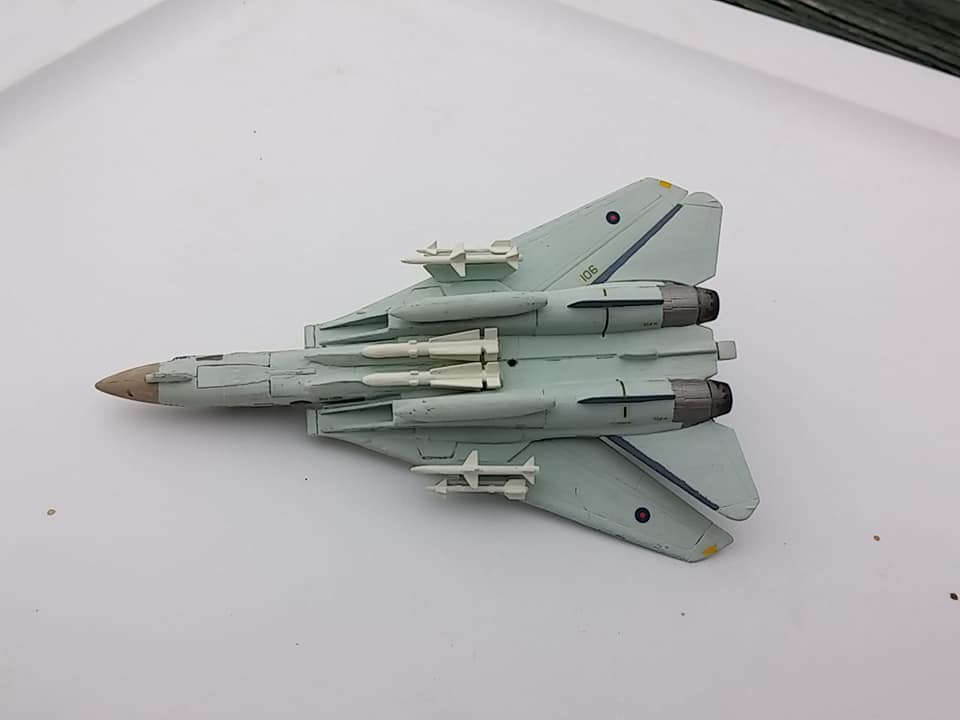 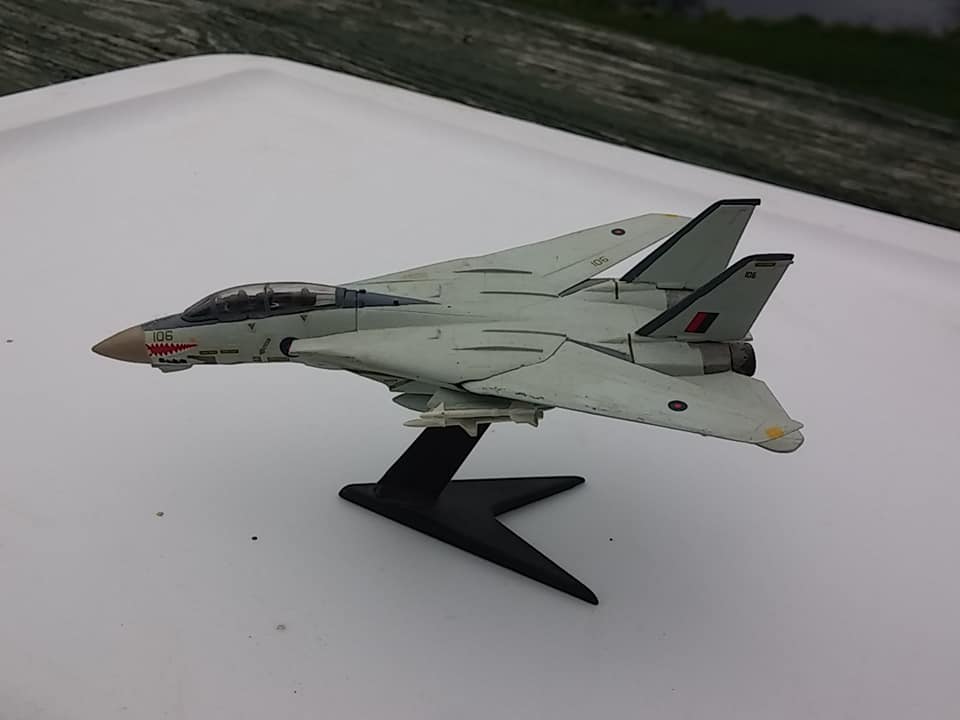 Cool! Nice to see the UK markings on a 'Cat.
Top

An interesting 'what if' I think the RAF would have been happy with the F14, the Treasury less so.

The RAF was writing checks that their Treasury couldn't cash...

Well the RAF would have had to re-engine it at vast expense first, for - at best - a modest gain in performance at low altitudes.

Thanks for showing us - it's a great build and really nice to see something a bit different with a Tomcat. Very nice.
Top

Obviously there would have been an F-14K - I came to the same conclusion - had their Airships gone ahead with the big CV carrier the Sea Vixen / Scimitar replacement might well have been F-14s............Phantoms were cheaper!

I figured that we wouldn't be able to afford many so Squadrons would need to share the aircraft...........good job the Tomcat has two fins!

The Ministry of Defence taking on the Treasury? Shades of "Yes Minister/Yes Prime Minister", for sure. Indeed, reading through some of the goings-on behind the TSR-2 project, it could well have formed the basis for one of the scripts.

Both builds here are great little "What Could Have Beens". No doubt we all have our "wish list" of aircraft that we would have liked OUR air force to operate or have operated. This lovely piece of Claveworks' art is one I'd have been happy with in reality! That's obviously purely "alternate universe" stuff, but I do recall that the RAAF seriously considered the F-15 and, according to this article, the Rafale and EF2000 Typhoon, so we Aussies could have a bit of Whiffery fun that has a historical basis.

smeg1959, I had read somewhere the RAAF had considered F-15s. I also remember reading they considered the A-6 Intruder if the FB-111 was unavailable. Please correct me if I am wrong.
Top

Pretty sure you are correct. And even if you weren't, a fellow Melburnian on Britmodeller did a nice bit of Whiffery with an A-6E in 1/48 scale.

Personally, I wouldn't have minded an ekranoplan or two operating on Port Phillip Bay!