The Aero L-159E Alca is a single-seat derivative of the hugely successful L-39 Albatros trainer and light fighter, incorporating the latest in technology within a very similar-looking airframe.
Whilst the acronym ALCA stands for Advanced Light Combat Aircraft, Alca is also the genus for the Razorbill, conveniently following Aero’s seabird theme. Isn’t modelling educational? Having made that discovery, I decided to refrain from references to Gannet Ripple and Stormy Petrel on a stick!
Anyways…
I believe that this subject is the second plastic kit issued by Miniwing, after their Cessna Bird Dog. Previously producing glorious little resins, having acquired the FE Resin tools, I’m unsure if the quality hasn’t fallen. Granted, some of the resins were often criticised for their excessively exaggerated panel lines and the earlier dot-matrix decals didn’t endear them to many, but generally, the kits were well worth seeking out and I noted a definite improvement over time. Their DHC Otter and Beaver and their Sea Vixen most certainly pleased me muchly.
It's my madness that keeps me sane.
The Modelling Man Cave: https://sites.google.com/site/themodellingmancave/home
Top

Plastic is obviously cheaper than resin and I’m sure the new Miniwing baggies are cheaper for all than their previous little boxes.

However, there are now, fortunately, more kit makers throwing their hats into the twelve-squared ring and I believe that there’s a subsequent rise in quality, especially amongst the limited-run brigade. Whilst I now believe Eduard lead the field, now that Revell seem to have abandoned their lead, the likes of Brengun, AFV and Armory are snapping at their heels in terms of relatively short-run quality and, of course, Dragon continue their own fine offerings. I could wax lyrical about the beautiful Platz and Pit Road/Great Wall Hobby, but these are few and far between here in Blighty. (Although I do hear tell that Eduard will be re-packing Platz items this year).
Further, Miniwing are not alone in changing their preferred medium, as Welsh Models abandon vacforms for resin and the likes of F-Rsin move from resin to plastic.

So what’s this latest Miniwing offering like to build?
(…And please note that it is Miniwing…singular…and NOT Miniwings, as many fail to grasp).

To begin with, the plastic sprue contains parts that are free from any real flash and the engraved lines are at least finer than many of those experienced with their resin kits.
It's my madness that keeps me sane.
The Modelling Man Cave: https://sites.google.com/site/themodellingmancave/home
Top

The finer detail did look a little on the soft side and I noticed a sink mark in the ejection seat that’ll have to be dealt with later. The edges of the mating surfaces of the flying surfaces are definitely not sharp and the intake splitter plates and undercarriage doors are decidedly ‘chunky’. I also foresee an issue with clean-up, as there are rather large sprue gates to contend with. Fortunately, I have a shiny new set of Dspiae nippers to help me out there.

There’s a set of etch supplied for aerials and the canopy does look nice and clear.

Only one decal option is provided with this baggie, that being for an aircraft acquired by Draken International, for Aggressor training. (There is another issue on the way, for aircraft of the Czech Air Force). The decals themselves appear to be in register, although I noticed that there’s a supplementary sheet with one stencil on and it appears that the black and white tail band is made up of two separate decals. Unlike previous Miniwing kits, there’s no decal for either the instrument panel, or the seat harness.

At first glance, the build instructions seem clear enough, although there are no indications for interior colours, nor is anything provided for exterior details. Looking closer, there is a suggestion that nose-weight is required, when I can assure you that it is not and then my attention was caught by the measurements given, to facilitate placement of the weapon pylons. These are grossly inaccurate and, even though I haven’t got a 1/72 model to hand, I might suggest that these would be more appropriate for such a model. These may only be seen by some as minor niggles, but to me, they demonstrate a lack of care not shown by other companies.

Well you need to guess the location of the cockpit insert and I was able to use the rear ‘parcel shelf’ to help me with this.

(At this stage, I decided to leave off the instrument panel and coaming, just in case the Modelling Gods threw a spanner into my works and I needed nose-weight after all).

The rear of the model got a blank disc, to block the jet pipe. This isn’t detailed in any way and simply serves to close up the fuselage. This won’t be an issue, unless someone decides to shine a torch up its jacksie for a look-see.

Before I closed up the fuselage, I relented and decided to add some extra detail to the cockpit area, especially as the canopy seemed rather clear and I suspected its lensing effect might highlight any lack of effort on my part. On-line images had given me clues regarding the colours and so I cut some strips of masking tape and painted these black and blue, to represent side control panels and a basic harness, respectively.

To be honest, I was happier with the cockpit when I was done, even if little actual detail will be seen.

I was then able to close up the fuselage, which wasn’t too bad a fit and only needed a light sanding to remove the seam. That said, there was a large gap to hide behind the pilot’s seat. Dry-fitting the canopy told me that I couldn’t ignore this!

I then turned my attentions to the intakes and…oh dear!

I remember building the Miniwing Supermarine Attacker and being impressed by the casting of the intake pieces, which were beautifully fine. Now, whilst I accept that plastic isn’t as good a material for the finer details, I feel that Miniwing have taken several steps backwards with this kit. If they were the only ones on the block then they might’ve got a Pass, but they’re not and many, many others, do it better. Anyway, whinging aside, I assembled the intake sub-assemblies and set about sanding down the splitter plates, to something closer to scale-thickness.

In between bouts of coughing plastic dust, I gazed forlornly at the spot where I was expected to fit the one-piece wing. For such a tiny kit, a lot of sanding and even filing was required. Fortunately, sanding down those splitter plates also improved the fit of the intakes themselves to the fuselage.

Cutting a long story short, much sanding followed, with subsequent polishing of plastics, in an attempt to hide the resultant gouges. I actually managed to put a lot of that plastic dust to good use, as, when combined with superglue, it formed a perfectly adequate filler!

Unfortunately, I did have to pull out the filler for the chasm beneath the fin.

As a break from sanding and filling, I reassured myself re nose-weight by fitting the main undercarriage.

Reassurance was indeed given and even when I added the nose gear, my razorbill stayed stable. 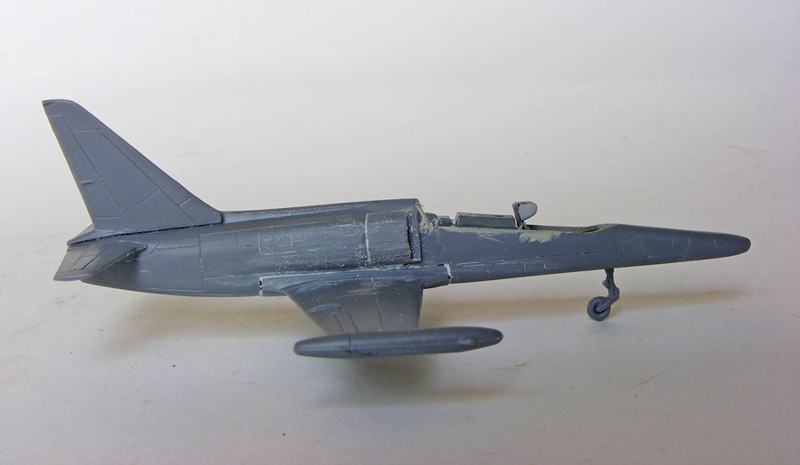 This meant that I could then add the instrument panel and coaming, which proved more of a trial than it could’ve been. The panel fitted to the coaming and then I had to guess where best to place this small sub-assembly. I found that if I placed it too far forward, the canopy would not fit and, too far aft, it would interfere with the seat.

Eventually, I placed as far forward as I could and still fit the canopy, but I still needed to file a little of it away, so that the canopy would fit without a gap.

This still wasn’t the best of fits, but white glue filled the remaining gaps.

Painting
After a day or so polishing and rinsing, I was able to slap some paint on. The instruction sheet quotes a mix of Federal Standard numbers and simple words, such as ‘Radome Grey’ and I was cautious about getting the right shades of grey…and don’t we modellers know that there are many more than fifty! I have learned from previous grey-painted builds that getting it wrong can be quite problematic for decal visibility, especially when those decals are in shades of grey themselves! After some not inconsiderable research, I determined that my Humbrol enamels would suffice and used the following;
FS36375 Light Ghost Grey: H127
FS36270 Medium Grey: H156
FS36118 Gunship Grey: H125
‘Radome Grey’: H140
Of note, apparently, on the real thing, there are patches of freshly applied FS36118 which are allegedly slightly darker and the instructions indicate this. I chose to ignore such pedantry, citing the scale as my excuse. Once I’d painted, I then began to apply the tiny photoetch aerials, using my most pointy of fine tweezers, with masking tape wrapped around the tips to lessen the probability of the pieces pinging off into the wild blue…

With completion now in sight, I discarded the wads of plastic supposed to be undercarriage doors and substituted my own fine plasticard. I also replaced a missing aerial with plasticard, after the ol’ Carpet Monster had pinched a sneaky snack. 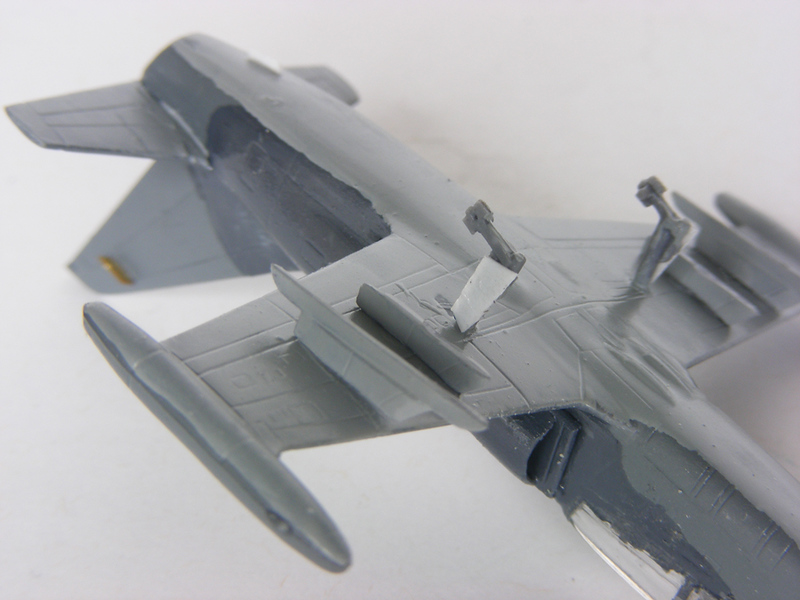 The more observant amongst you will notice that there are no gear bays to speak of and, as a consequence, this is a model that will not be displayed upon a mirror. It was also at this stage that I discovered the uselessness of the measurements given for pylon location and ended up using the Eyeball Mk.I. Fuel tanks and sidewinders are provided and I note that at least one issue of this kit will contain some nice looking resin ordnance. These were, again, clunky in detail.
Decaling was my final task and these are not made in-house and, even though I am usually quite proficient at handling tiny decals these were a challenge, to say the least. The problem was that they tended to fold over themselves at every given opportunity and trying to apply them using the small paintbrush I normally use for such a task, proved relatively impossible, as the decals preferred to wrap themselves around the individual hairs. I do appreciate that decals for 1/144 subjects are best when they were very thin, but again, this isn’t a problem I’ve encountered with those of other companies. The instruction sheet for decal placement was very unclear and I never did work out the purpose of that ‘extra’ stencil decal.
Still…I got there in the end…eventually.
It's my madness that keeps me sane.
The Modelling Man Cave: https://sites.google.com/site/themodellingmancave/home
Top 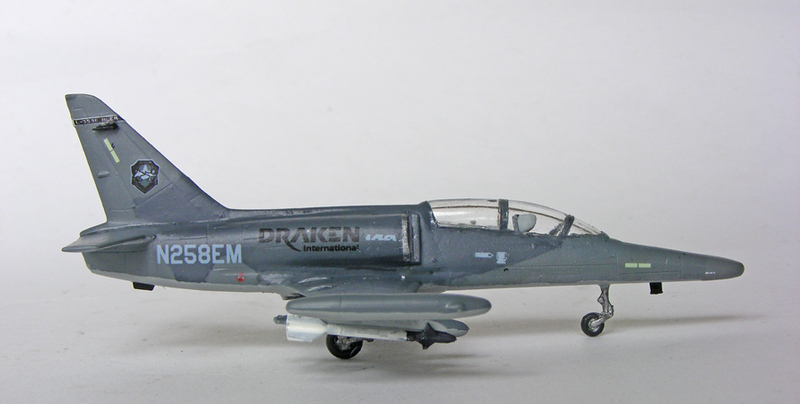 It's my madness that keeps me sane.
The Modelling Man Cave: https://sites.google.com/site/themodellingmancave/home
Top
Post Reply
19 posts