My finished models so far

For the discussion of aviation and aircraft subjects. If it flies, it goes here!
Post Reply
28 posts

Well, the original masking was pretty bad tbh. Back then, I hadn't yet gotten the hang of pressing the tape properly into the panel lines with the tip of a wooden toothpick or similar. To make matters worse, I used really thin and watery colours in an attempt not to lose too much surface detail (which was not that successful) - the combination of both resulted in a lot of paint bleeding. After a million corrections, I finally got it sorted.

If I were to build another one of these, I'd probably start by researching the Eduard Mig-21 that comes closest to the J-7 and buying that. Then the Trumpeter kit, from which I'd take the wings and bin the rest, and then I'd graft the J-7 wings on the Mig-21 fuselage.

Sooner or later I might have some PLAAF roundels in the right size that I could use to complete this model, but I don't know if I would even use it on this one or try again using the aforementioned method. It's really low on my list of priorities, though.
Top

Some words on the kit first...

Although just as old as the previous one, I found this kit to be a lot more enjoyable. The panel lines are still rather deep, accuracy is not great (I suspect many raised/recessed details were simply interpreted as panel lines - some ventral air scoops towards the rear, for example, are represented as flat contours, just like in a 2D plan) and many details look a bit clunky. The fuselage is split horizontally, with wings and horizontal stabilizers attached already. Unfortunately, this means that some detail is lost at the sides of the nose section due to mould separation.

Only the vertical stabilizers, the nose cone, the twin exhaust section, and the intakes need to be attached, and you're mostly done. Fit is decent.

The decals are sparse once again, and the unit number seems to be ficticious, but they work well, and the actual aircraft doesn't seem to have much more going on.

What's really bad is the canopy. The shape is ridiculous. It starts with a steep wall that rises to a certain height without any curvature, and the rest is pretty much a half cylinder. Another bad part are the intakes. Not only their exterior walls, but also the horizontal air baffles inside are thick and clunky. One of the baffles extends all the way through the intake to be inserted into a slot in the fuselage side and hold the intake in place - a bit like this:

These are the modifications I made: The canopy:
Fun story. Since the thing was rather thick, I decided to try and sand the front to a less steep angle and polish it clear(ish) afterwards. However, I went too far and ended up with a hole. Smart move.

I then decided that I might as well go with it, and since I didn't have Krystal Klear back then, I simply glued a piece of plastic from a blister package to the front. While all of that is quite a mess from close up, the overall shape makes all the difference!

The intakes:
I decided to keep those plastic tabs because that would be the most stable solution. But how to get the other walls thinner ? (I didn't have micro files yet when I built that kit)
I ended up cutting out the side walls with the tabs attached. Cut the tabs to length, sanded them thin, and sanded the top and bottom walls (which were perfectly accessible now) thin as well. I discovered that - strangely enough - the rear wall of the intake sides, where these would attach to the fuselage, was surprisingly thin. The front sides that would point towards the nose and remain open, however, were thick. So I flipped left and right around.
Since the gap was now bigger after sanding the top and bottom walls thinner, I had to use some filler to close the intakes again, and then blended everything together while also rounding the edges a bit. The intakes still have the wrong cross section (too wide in relation to the height), but that can't be helped.

Colour-wise, I went with a mix of roughly 50/50 white and Vallejo White Grey, plus green dielectric panels and nose.

Gear up once again suggested itself here because if the aircraft is called "Finback" for its ventral fin, I want to show that thing!

I'm quite satisfied with the result, here the pictures: 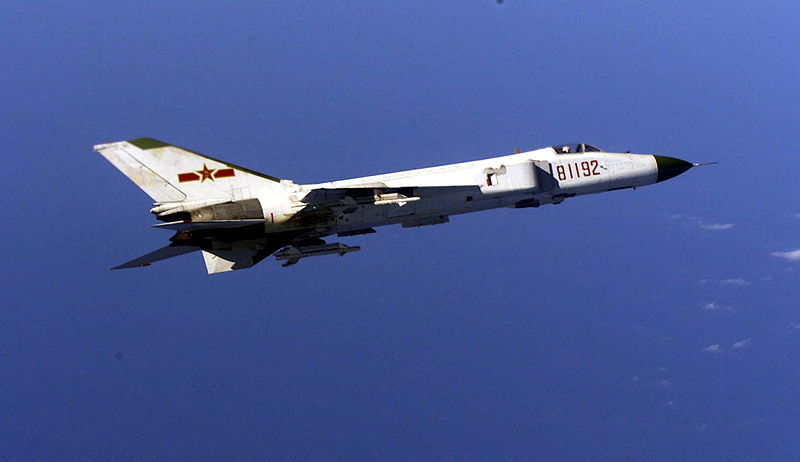 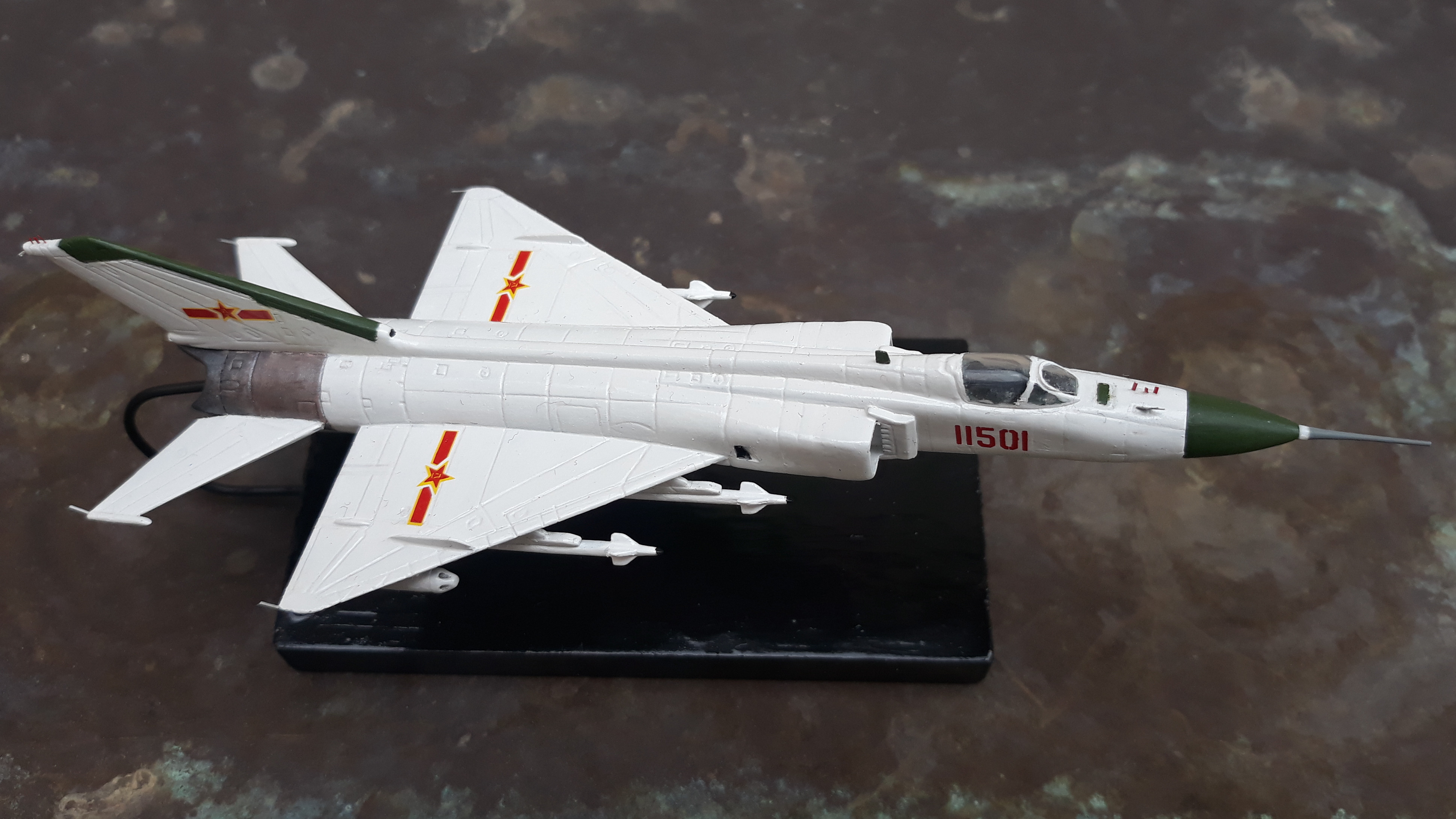 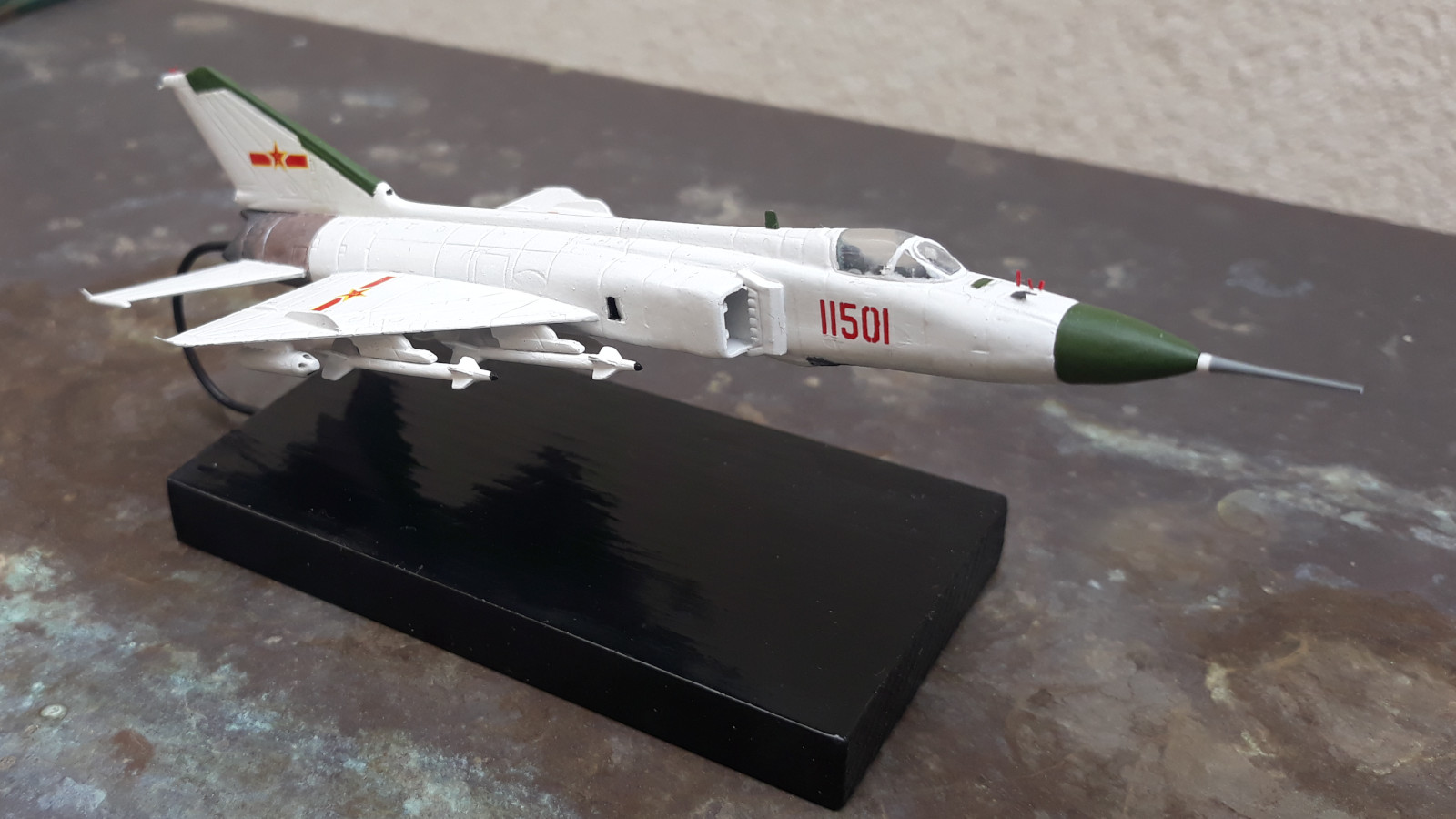 Here you can see how the walls of those auxiliary air flaps look thin even though they aren't. 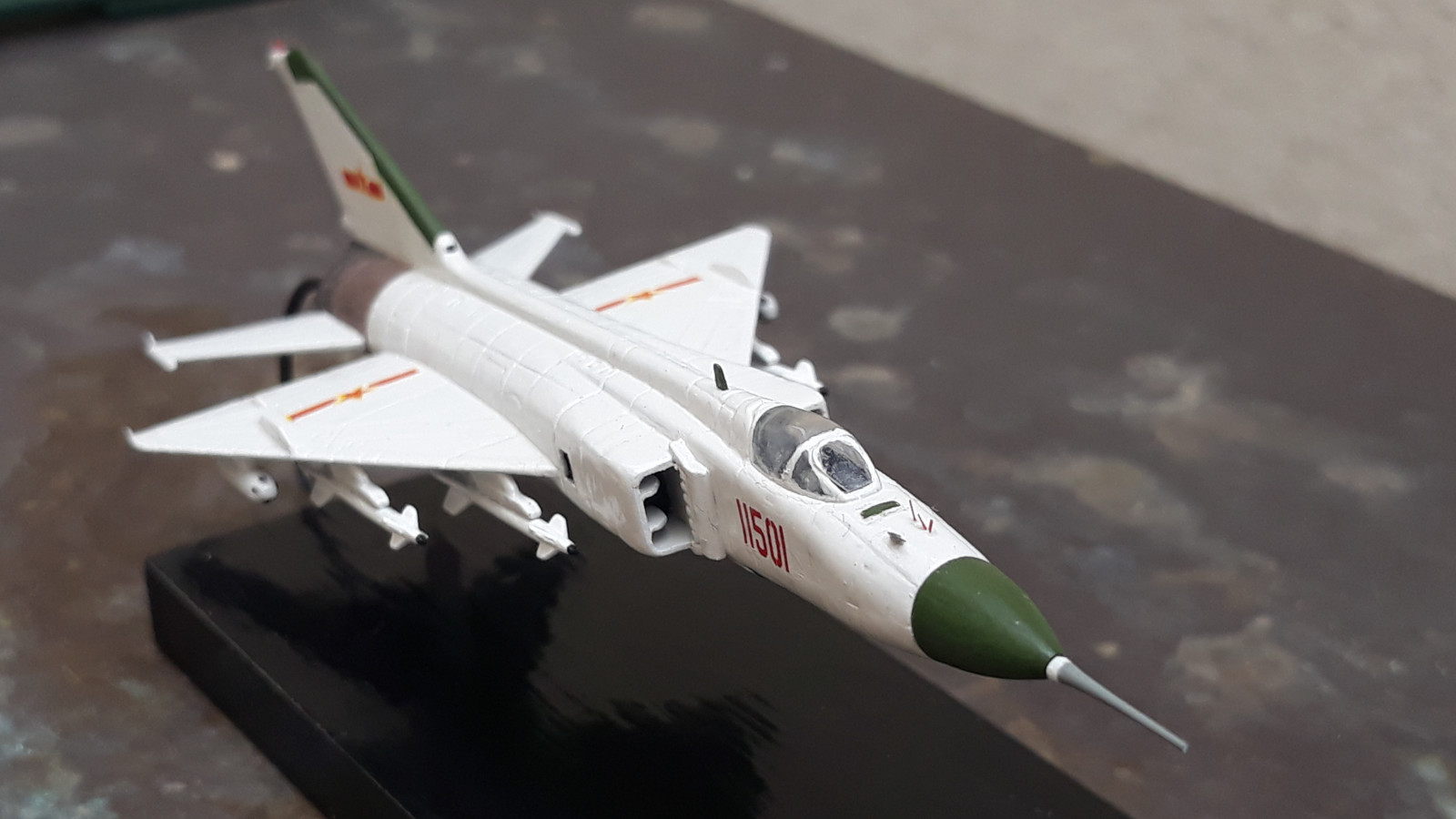 The intakes of this aircraft are sure interesting. But oh boy, did I butcher that trident antenna! 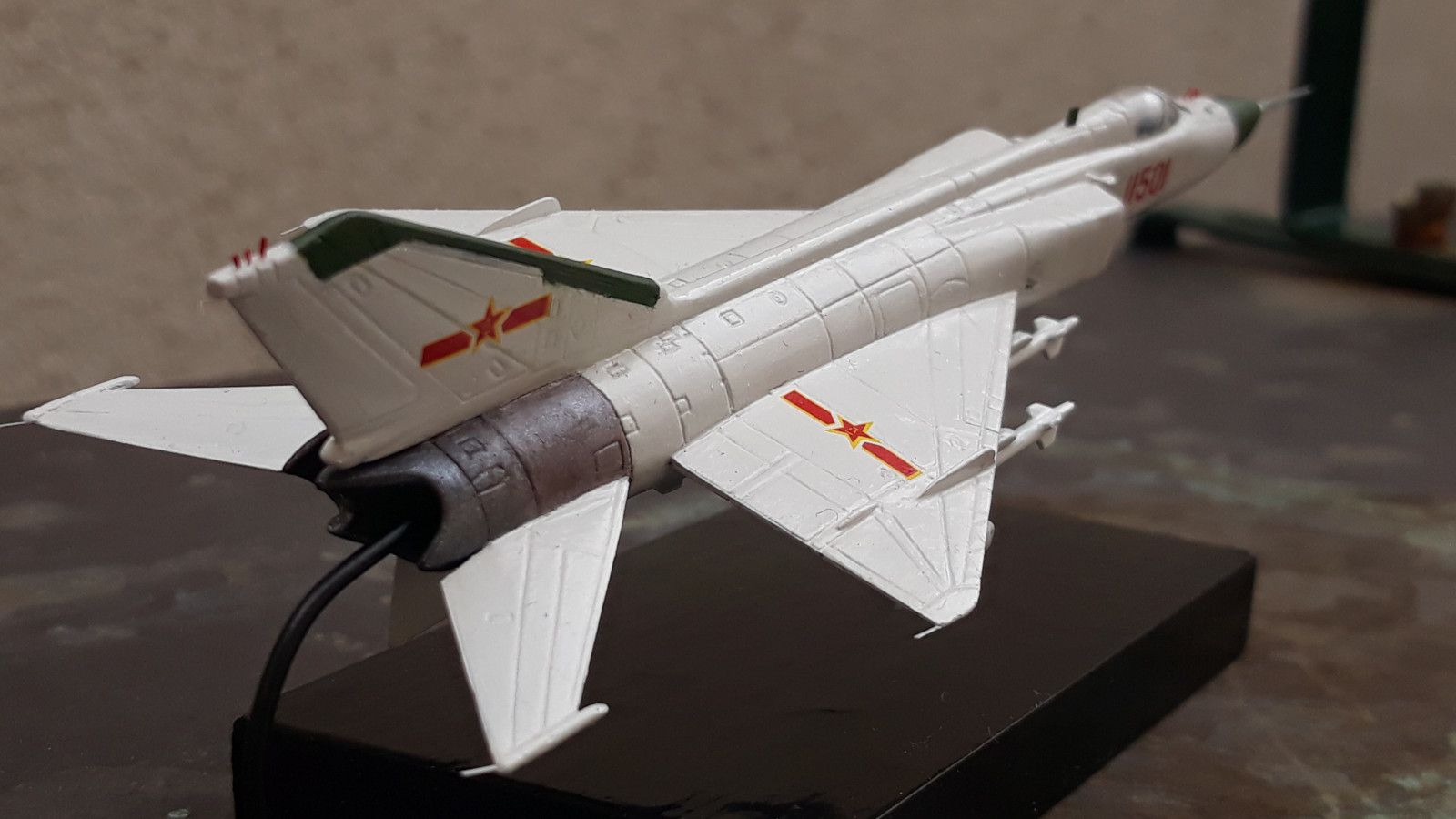 The one perched on the vertical stabilizer is better. 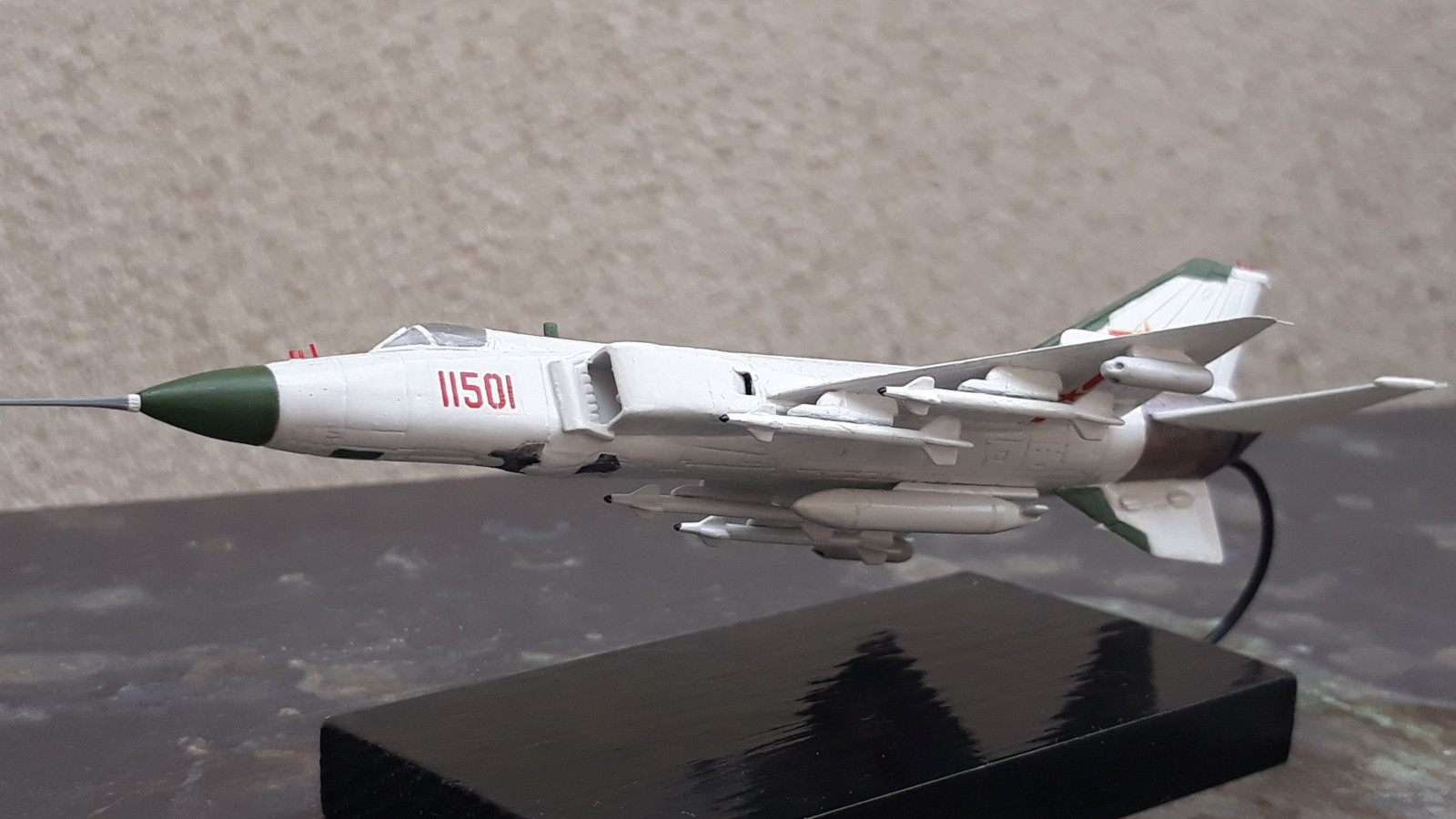 The loadout looks unrealistic, btw. Using only air-to-air missiles for interceptor missions or only the rocket pods for ground attack missions would seem more plausible to me, but let's just imagine this was a demonstration flight for some politicians and military brass...

Fun fact: The kit came with a pretty toyish-looking twin gun, but I could not find any evidence of that. I came to the conclusion that the little hump under the nose is the gun bulge, and tried to paint it more or less as seen in photographs. 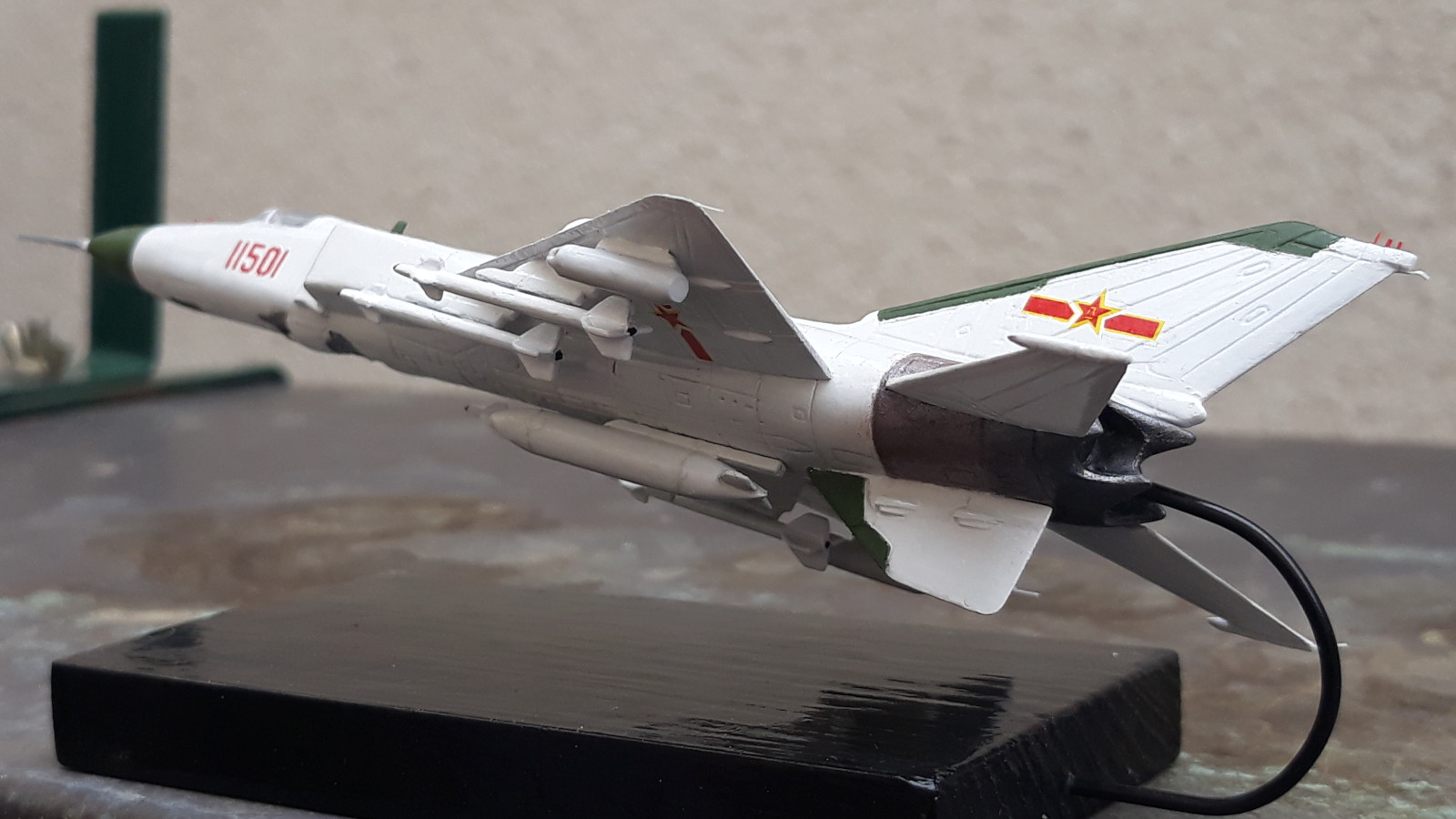 A nice view of the fin! 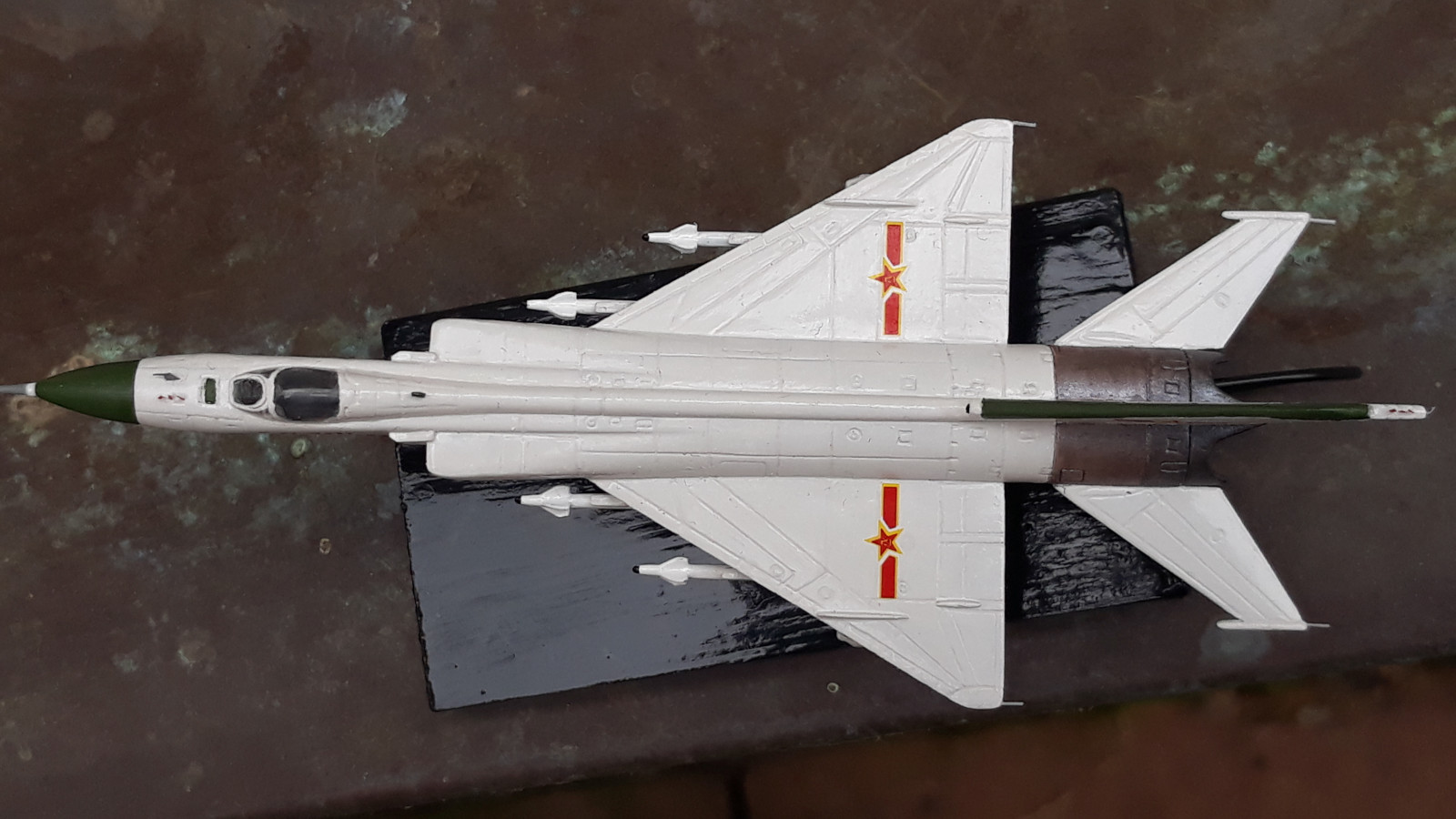 While the colours on the exhaust section are not correct (too coppery in the front part), I do think that this area really looks a bit like metal, so I'm quite happy with it nonetheless. 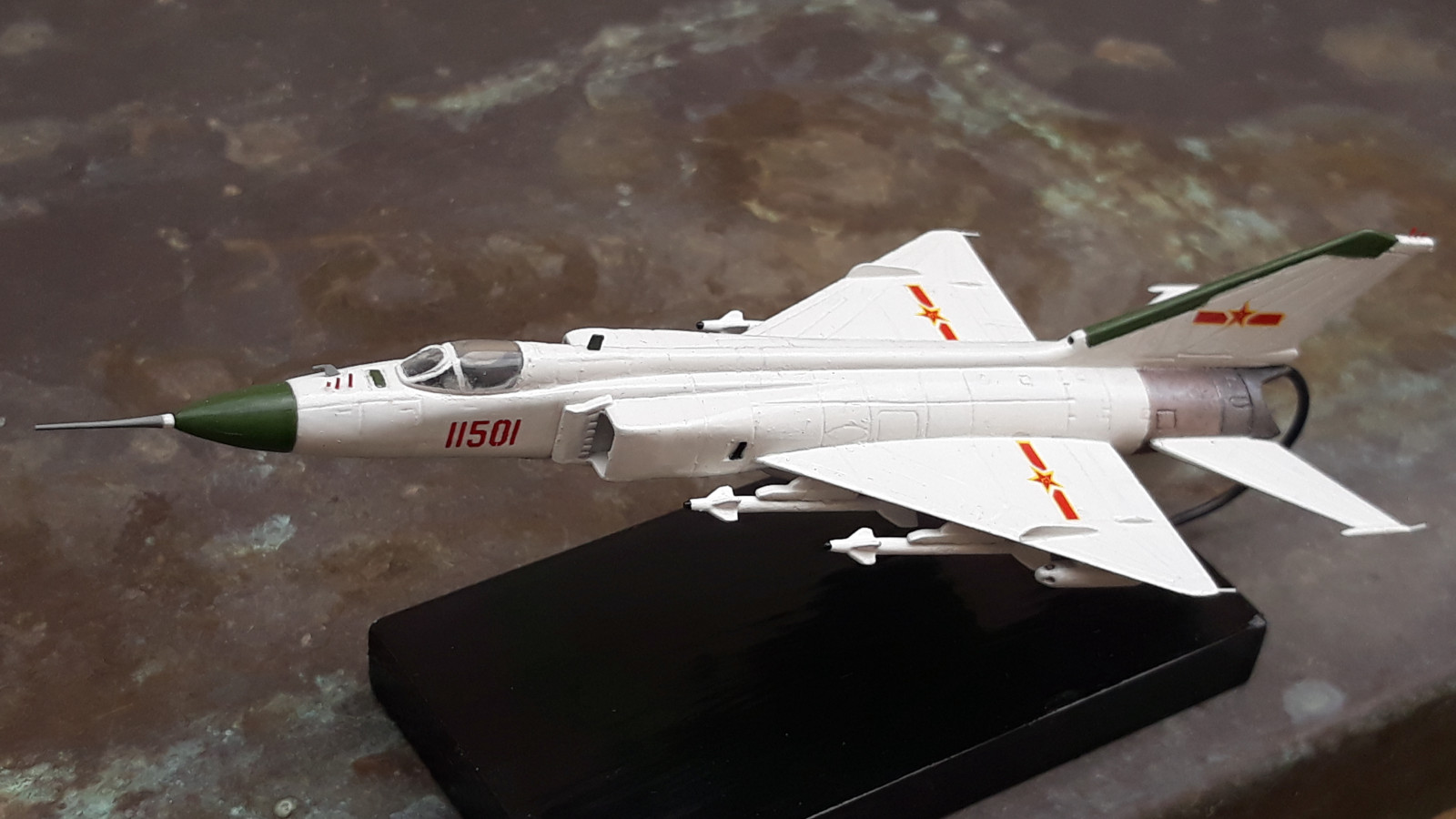 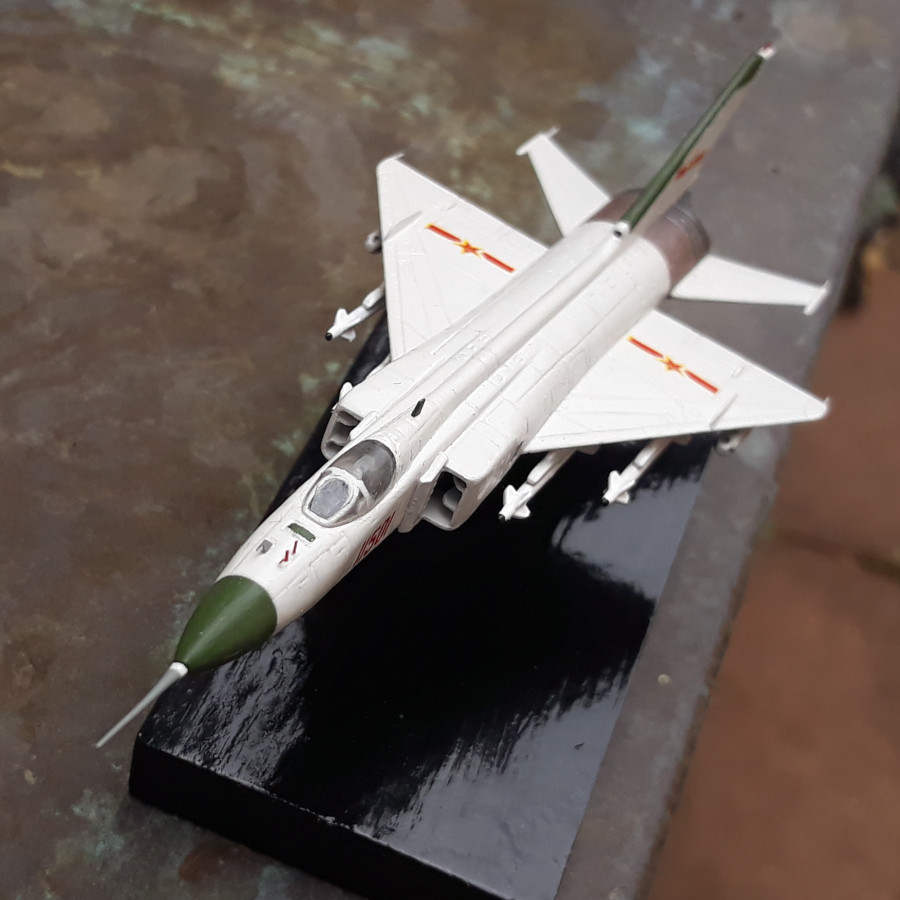 It's a relatively good-looking aircraft IMO!

What went well What went not so well
Top

For many of us, white is a nemesis. Clearly not in your case. Indeed, the white works really well on this aircraft IMHO. The issues you had a certainly not obvious from the photos. And how many times are we faced with dodgy canopies? Keep saying that someone out there should start vacforming all those examples not yet covered by Brengun, etc.

Still intrigued by your clear varnish redissolving well-and-truly dry paint. The only time I've really encountered this is if I get carried away and lay down too much of the clear at once (a real risk with rattle cans). A few fine coats with around 10-15 mins between each coat seems to do the trick.
OTB ...
GB18 - B-25B Mitchell (F-Toys)
GB20 - AW.650-222 Argosy (MikroMir)
SoS - Lancaster B.VII (Crown), CAC CA-19 Boomerang (KdK), Me262A-1a/U4 (Eduard/RetroWings)
Top

Fantastic! Despite your troubles all the extra effort paid off in a big way. Really nice. I too have had that problem with clear dissolving the paint and it’s VERY tedious when it happens. Especially on a white surface.

Very nice! Respect - starting with your decision to make a white(

) model!
Apparently this was no shake-and-bake kit, but your surgery on the intakes and saving the windscreen were well worth the effort!
Top

Thank you so much, glad you like the model.

As for the white, it's really odd. As soon as you add something else to the mix (even very light grey as in this case), it suddenly becomes a lot easier. Of course, the deep and wide panel lines will also have helped. However, I have a story of another white aircraft in preparation for you where you'll see that I have just as many problems as anyone else. Maybe I have used up my beginner's luck in the meantime?

My personal theory regarding the issue of clear varnish dissolving the paint - 100% guaranteed to be completely unmarred by any science, knowledge or evidence (other than anecdotal)...

I had been using Tamiya varnish and a mix of Vallejo, Revell, and Tamiya paints up to that model (and for the few next ones). According to my experience, Tamiya products are hard to brush anyway, especially due to bad surface adhesion. They seem to be optimized for airbrush use, but I'm using the hairy stick. Besides, whereas Revell and Vallejo are water-based acrylics, Tamiya and Gunze are alcohol-based, and so are their thinners.

Now, when you spray varnish and do it right, a mist of tiny droplets will settle on the surface, and these droplets will dry so quickly that, even if a bit of paint were to be dissolved again, it would not spread far. However, when you brush that stuff, you need higher quantities than just a few quick-drying droplets (you want to get a coherent surface without visible brush strokes, after all!). To make matters worse, you also sweep the varnish across the painted surface with some degree of mechanical pressure. Both factors combined are apparently enough for the varnish to dissolve the underlying paint. The paint being matt might also contribute because matt paint has a coarse surface from which pigments might come loose more quickly, especially when swept with a brush.

I have bought Vallejo water-based varnish in the meantime, and the problem seems to have disappeared. I guess the stuff, being water-based, is less aggressive to the surface and, hence, less likely to cause pigments to come loose.
Top

Several of your comments about the paints and varnishes ring true with me.

After relying on them for years, I dropped Humbrol enamels for Tamiya acrylics in the 1980's, in part because it was so much easier to clean out the Paasche airbrush I was using at the time. Oh, and Humbrol pulled the plug on its "Authentics" range. When I resumed modelling in the mid-2000's, I started back with Tamiya. However, I had issues with their later colours (especially XF81 to XF83) and discovered Lifecolor which, for a goodly while, became my "go to". True, it dries overly quickly so can be a bugger blocking the airbrush nozzle, but it covered well and seemed quite resilient to handling.

Then the wholesaler who imported Lifecolor into Oz went belly-up and I had to find alternatives. Since then, it has been Mr Hobby, Vallejo, Hataka acrylics and lacquers, SMS lacquers and, most recently, AK acrylics. I do have to be acutely aware of which thinners work with which paint. For instance, adding Tamiya thinners to Lifecolor causes pigment particles to drop out. I am growing to love lacquers (despite their insidious odours) as they airbrush beautifully and are tough as nails once dry, but there are limits on what is available locally, so acrylics fill in the gaps. The latter also behave better when using hairy sticks.

As for varnishes, Tamiya TS79 semi-gloss and TS80 flat clear have been my choice for a long while. Being rattle cans, the overly heavy layer issue can be a problem as the solvent is "hot" (even discoloured some decals a while back). I tried the siphon-off-and-airbrush approach, but only with limited success. I've also used Humbrol's clear flat but didn't quite achieve the same level of "deglossing" that TS80 provides. Similar with the Vallejo product you are now using, so just keep that in mind if you have gloss-coated for decals, then want to seal and reduce the gloss afterwards.
OTB ...
GB18 - B-25B Mitchell (F-Toys)
GB20 - AW.650-222 Argosy (MikroMir)
SoS - Lancaster B.VII (Crown), CAC CA-19 Boomerang (KdK), Me262A-1a/U4 (Eduard/RetroWings)
Top
Post Reply
28 posts