Anything from a lunar lander to a gyrocopter, taking in jump-jets and conventional helicopters, one-off prototypes to mass produced designs. Basically, if it can take off vertically, then it's eligible!
Runs from 21 January 2017 to 10 April 2017.
Locked
10 posts • Page 1 of 1

Now this really would have been a deathtrap - a tiltrotor minus all the fly-by-wire tech that makes the Osprey just about flyable, and designed to land on water. Hmmmm. It was mooted as an air-sea-rescue bird early in WWII and I can honestly say that if I was bobbing in the English channel after climbing out of my downed Typhoon, I would be very hesitant about getting aboard. (OK I probably wouldn't but it's definitely a possible frying pan and fire situation).

This was a design patented by Leslie Everett Baynes, an eccentric British designer who was the brainchild for a range of whimsical projects (the Baynes Bat - a design for a glider that could carry a tank, for one) but who also patented the concept of variable-sweepback wings for transsonic flight, something the British government ignored postwar but which the Americans snapped up (cue: F-111 Aardvark et al).

The Heliplane was patented in 1938 and was the first design for a VTOL swivel turbine aircraft. The power plant was a novel and intriguing feature, being a free-piston powered by the exhaust gases from the turbine engine. This effectively means that the need for complex gearing and heavy propshafts was removed, with the rotors being turned by the exhaust gases fed along steel pipes through the stubby wings to the tip nacelles. The other interesting feature was the watertight hull of the aircraft, which was designed to be able to land on water, with the rotor housings at the wingtips acting as stabilisers (as well as housing semi-retraceted landing gear when on land). 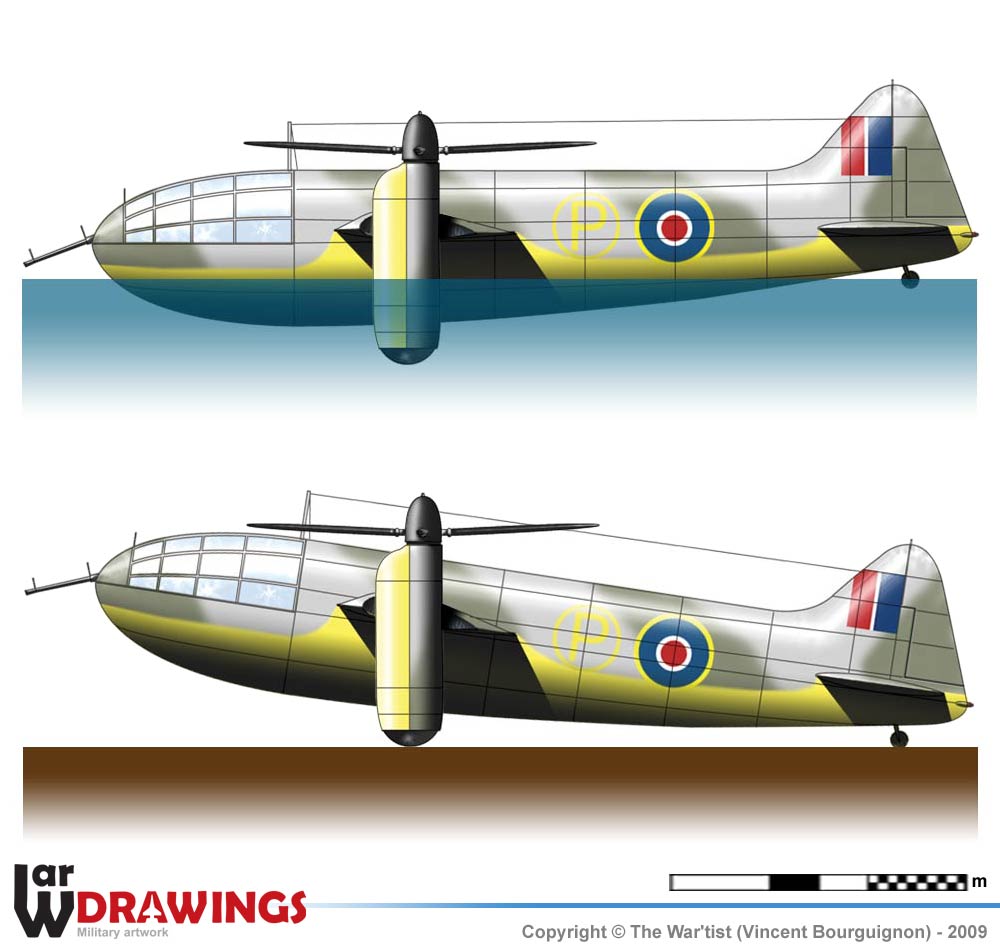 The design failed to get government backing, however, and never existed beyond paper. I don't know precisely how useful this concept was to the Bell design team in the mid-1950s when they began work on the XV-3 (and later the V-22), but it's nice to think it was. I must say (despite knowing virtually nothing about VTOL flight!) that I can't imagine this design working as originally conceived. I doubt the turbines of the time would have had the power to lift this (I would think that a lot of kinetic energy would be lost in the free-turbine concept, which reeks of inefficiency to me) and if it did lift off it would have a minimal payload. I also dread to think how unstable this would be at low speeds and in the transition, the most vulnerable time for a VTOL aircraft and in many ways the stage of flight that best illustrates the effectiveness of the design. But I'm a self-confessed ignoramus know-it-all in this so I may be speaking out of my proverbial.

Anyway - enough waffle about something that never actually existed. The kit comes with the Anigrand Stirling and really is quite lovely. The panel lines are very fine and there is lots of surface detail, including little vent things on the upper wing surfaces and lots of detail on the wingtip pylons. Very impressive.

I have the wings on and painted the underbelly yellow. I think I will go with the conventional green/earth/yellow prototype scheme for this. Tempted as I am to do a what-if, this will sit intriguingly alongside my other RAF WWII-era prototypes. I was also tempted to do a natural metal finish but I have erred away from that as I have quite a few NMF fellas on that shelf. Photos to follow later.
Top

Given the oddball projects he would often come up with, Les Baynes would be very impressed that two of his designs have been commemorated with Anigrand releases. The other (and much more conventional) is the little Baynes Bat that comes with the Windsor. Whilst the Bat has also appeared in 1/72 (a JACH kit), I don't think the Heliplane has never seen the light of day in any other scale, even from Unicraft. Look forward to seeing this one take shape.
OTB ...
GB13 - Late 298 (Aeronavale), Bf109E-3a Strela (Bulgarian AF), ČKD LT vz.38 Praga (Slovakian Army)
Top

I saw one other 72 kit for this when I was on my travels but I don't know if it was scratch built or not.

I painted the undersides yellow. My tin of Humbrol 24 is reaching the end of its life - very tacky and gloopy so took quite a while to dry properly. I let it be for a few days, then masked and painted the dark earth.

Some dark green next and then I'll see about this interior and the canopy. The fit of the wing pylons is excellent. I'm almost tempted to leave them loose so I can reposition them, although with those whapping rotors on I doubt it will sit in any attitude other than landed.
Top

Haven't managed any consistent time in the man cave lately, just snatched minutes more conducive to smaller projects like this than the big Bertha Boeing job.

Got the camo sorted and added the cockpit and canopy. Replaced the front gun with some .7mm brass tubing (still looks quite chunky) and need to add a bit more sights detail on this.

Props are painted up and so its gloss coat, raw umber wash and decals next. Touched up some yellow earlier and still tacky so that will have to wait until tomorrow, when I hope to get this finished.
Top

Just the wash and some details on the Lewis gun and an aerial to add, then she's finished.

Should have this done today.
Top

That is a strange looking beast!

Agreed and please can we have a closer look?
It's my madness that keeps me sane.
The Modelling Man Cave: https://sites.google.com/site/themodellingmancave/home
Top

The umber wash worked well I think - brought out detail on the pylons and the vents on the upper wing surfaces.

And I have finally found Gerald, who you may remember as being the square-jawed, wavy-haired and all-round devilishly handsome RAE test pilot I employed previously for scale. As this photo shows, its quite a small aircraft.

Gerald (who is wearing US uniform for some reason) is looking decidedly unhappy, having been ordered to take this up for three spins already today. Nothing has brought that upper lip closer to un-stiffening… Lethal, thing this heliplane.

Thanks for all the comments and enthusing along the way - I enjoyed this one!
Top

What an intriguing looking bird! Great build! Problem is, now I want one ...

Not all that different from the Osprey!

It's my madness that keeps me sane.
The Modelling Man Cave: https://sites.google.com/site/themodellingmancave/home
Top
Locked
10 posts • Page 1 of 1