If it relates to Terra Firma, wheeled, tracked or booted - man or machine on the land - it goes here!
Post Reply
8 posts • Page 1 of 1

I've been gently packing up my man cave (sniff) in preparation for a house move, and I couldn't resist throwing this Brengun Clarcat together.

The Clarcat Type B deck tractor was adapted from an industrial tractor, and was used on aircraft carriers from the end of WW2 until the 1950s when bigger, heavier jets necessitated something with more pulling power. They served in Korea and can be seen in the background of various photos of Sea Furies, Seafires and Fireflies (and lots of very cold looking crew) on aircraft carriers in the Sea of Japan. There's something faintly Mr. Bean and distinctly British about them, I think. Like a Reliant Robin perplexed to find itself at sea. They also served on some French and Australian carriers too.

I thought it would be a v simple kit but it does have some very fiddly and tiny parts. Who'd have thought?

I don't quite know why the bonnet of this is moulded separately to the rest of the chassis, but it was the only area where filler etc. was needed. You have to provide your own steering column. The etch is thin and very nicely done, as you'd expect - no real dramas adding that, though I added a blob of black paint to make the gear knob more knobbly. I fed the carpet monster the miniscule pedals but somehow managed to find them again, almost incredibly.

These Clarcats came in three shades - chiefly either 'Royal Blue' for WW2 and immediately after; Yellow for Korea era. No idea when precisely the paint schemes changed over. There's also one photo of a Clarcat spotting a Korean Sea Fury with a pale body and dark bonnet (no idea of shades - possibly yellow and blue though).

I went for a blue cat because the decals that Brengun provide are white - and so clearly designed for the blue model. That there are no black decals that you could use with a yellow-painted Clarcat which seems a bit of an oversight. I went with Tamiya X-4 which was about close enough to the one good colour photo I could find.

The decals are for HMS Victorious in 1944 (about the time of the Tirpitz raid, as in the pic above) though these remained blue postwar for a time. Decals worked fine but - unlike most other Brengun kits - were printed on single sheet carrier film. This slightly took me by surprise so I had a bit of a tricky time separating out the already-wet decals from one another. My fault entirely, though.

I used some oil paints to create a fabric effect on the canvas seat, which I rather like. I also took liberties and painted some things jazzy colours - like the hydraulic bottle (?), which I thought would be more fun in red. Tell nobody. 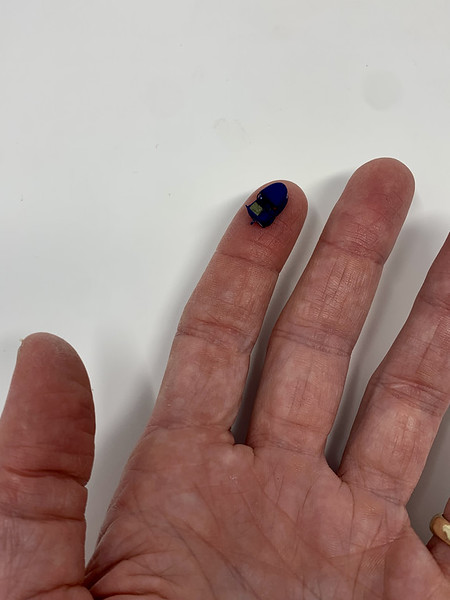 Even compared to my other aircraft tractors...

Altogether a pretty simple build and good fun. I also have the later FAA Tugmaster deck tractor that Brengun released simultaneously to this, but that looks more complicated and I'm still summoning the courage for that.

D'awww! It's so cute! I totally agree with the Mr. Bean vibe, too. Maybe it's just that rounded and somehow friendly shape. The cloth effect looks brilliant, and so do the other small refinements!

And of course, this being you, not only is the result awesome, but you also have a load more equally awesome stuff alongside which you can present it... fantastic collection! A timeline of tractors...

Thanks! I was thinking vacuum cleaners next, actually.

Outstanding! The color is spot on in my eyes. Reckon, there was some serious careful fiddling involved in your " throwing together"

A real little beauty!
Moving house can be a real pita, I know. 80# of my finished models are still in the boxes, as I've not decided when ( and where) to move next . . .
Top

I thought this was going to be about “Clearcoat”

What a nice surprise. Lovely model and wonderfully informative as always too. I really must keep my eye out for one of those.

Yes, the title had me wondering, too. I was thinking "Bearcat", "Hellcat", "Wildcat", etc. and thought I'd missed one. And cute is an understatement! When my daughters see this diminutive vehicle, I know I'll get, "Buy one, Dad!"

So what IS next? You've suggested fire extinguishers and vacuum cleaners. I reckon the pilot needs a scale bottle of lager and a ciggie to celebrate another mission down ...

Well that is an utter delight and so very tiny!
Top

I noticed that Brengun also released this in 1/72 and 1/48 scales, something they have done previously with several of their range. Thinking between the lines, could they perhaps look at those two larger scales and give us some more 1/144 scale goodies? Plenty to choose from ... Hs126, Mustang Mk IA, A-36 Apache, Bv40, Zeppelin Rammer, Spitty Mk V Floatplane. And a Typhoon to finally replace the ancient Revell kit.