The two decades between the First and Second World Wars saw major advances in all areas of technology. In military and civil aviation, flimsy wood and canvas biplanes and triplanes gave way to sleek all-metal monoplanes. The lumbering "land ships" of WW1 were replaced by maneuverable tanks and armoured cars. In this GB, anything that was developed and operated between 1919 and 1939 (but not WW2) is fair game.
Runs from 10 August 2019 to 26 January 2020.
Locked
104 posts 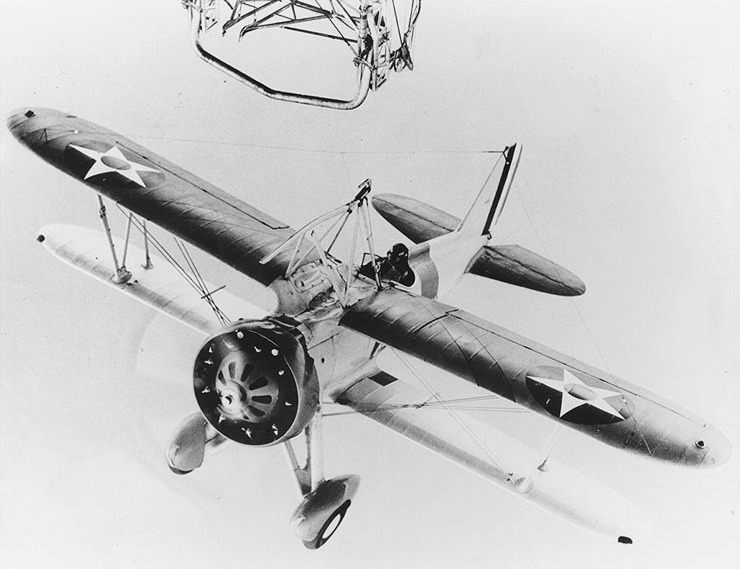 Here's where I'll attempt to complete a Curtiss F9C-2 Sparrowhawk. That attractive little parasite fighter that served aboard the Akron and Macon airships of the US Navy.

There is something of a carnival aspect to US aircraft between the wars. All the more so with the Sparrowhawk. What with its red nose, diminutive size, garish yellow wings, stripes and stars all over the place and that cats-cradle with the nutty upside-down arrestor hook. It looks like something out of a circus. Indeed, after it finishes its high wire trapeze act and gets hoisted back aboard its floating aircraft carrier.... I'd almost expect to see a dozen clowns come tumbling out of it.

I've liked this aircraft for a long time. A real long time. Which is why I thought I'd try to do myself a favour and see if I can add one to the collection. If I can finish it, it will be a nod to a much younger me and a lesson that its never too late to finish that which you have already started.

Some builds sit on the Shelf of Doom. This one is almost part of the archaeological record, as I started making it in 1997.

At the time there was precious little information to hand. No internet in my part of the world, and all references had to be sourced from an indifferent local library. I had some plans from a Putnam book on Curtiss aircraft and a 3-view drawing from a Rareplanes vacform kit in 1/72. Armed with those I gave it a red hot go. Materials were domestic and automotive for the most part. Some beech wood offcut was used for the fuselage and a precious bit of styrene for the wings. Primer and putty were from the car section at the hardware store, and resisted all but the most rigorous attempts at shaping and sanding.

The bits of this poor incomplete Sparrowhawk have been with me for more than twenty years, and I can still remember the many hours I spent whittling and scraping it into shape. The younger me always hoped to complete it one day. I think it's time it finally came together.

Here's a few shots of it after I dug it out of an old biscuit tin. Lets see what we can make of it.

This should be good.
Top

We'll see how it goes. There's plenty of work to do to bring it up to date. In many respects it would be easier to start again, but there's a strong sense of nostalgia to this one and I'd love to see it finished.

Over the intervening years I have found some much better drawings and I was able to scan them at high res and reduce them down to 1/144 scale. Once that was done I began to check to accuracy of the work. To help do so I made a very simple jig from some plastic card which supported the aircraft with the upper edge of the card aligned to the level of the thrust line from nose to tail.

I pinched this idea from a warbird restoration photo I saw in a magazine. It makes plotting and measuring a breeze.

On my drawings I superimposed and identically-sized block that represented the position of the jig. By using the edges of the jig as a datum I could then accurately transfer measurements between the model and the plans.

Things were looking pretty good at this stage (he said, blissfully unaware of what was about to happen next). The profile wasn't too bad. The headrest was .4mm too tall, and the tail was 1mm too low, but that wasn't a biggie. I was encouraged to find that the lower fuselage was pretty good, while the distance between the wings and their forward stagger was okay too.

Then I went to check the plan view...

Oh dear god. What did I get myself into? The fuselage was way too wide. Like, Grumman wide. No scratch that. It was Mitsubishi Raiden wide.

Looking at the plans and various walkaround photos, it was clear that the Sparrowhawk fuselage was barely shoulder width, whereas mine was a portly barrel of a thing. Something had to be done, so I reluctantly began trying to file it down.

I started off as delicately as I could. Scraping through a veritable who's who of primers, putties and adhesives. Eventually though things started to fall off, and before I had gotten even halfway there I had already dug clean through the side walls of the cockpit.

I found with a bit of care I could preserve the upper bit of the cockpit edge. So I added some new side walls from .5mm styrene and flushed them in. Maybe it will work out okay

Here's where it sits now. I'm currently shaping the rest of the fuselage to try and get the cross sections to match. Hopefully once that is done I can start working towards getting a smooth surface and putting it all back together.

When I read "F9C-2 Sparrowhawk", I thought, "Mmmm, 3D-printed?" Then I remembered on whose workbench it was and the word "scratchbuild" appeared before me. This will be good!

With this attention to accuracy I expect F-IV to be adding Lidar to his toolkit!
David
Top

Another interesting aircraft and and without doubt you will turn it into a little gem.
Regards
Peter
Top

Thanks chaps. Wish me luck!

It's extraordinary how little love the Sparrowhawk has had from kit manufacturers over the years. Considering how attractive and compact it is and how structurally simple it would be to assemble in kit form. One would expect to see injection moulded examples in all of the popular scales.

Perhaps if I can knock this one off it will break the jinx and someone like Dora Wings will announce one in 1/144 shortly thereafter...

A favorite a/c of mine, I'm also looking forward to seeing you pull it off, particularly the skyhook! Interestingly, on maneuvers the unnecessary main landing gear could be removed for decreased weight and wind resistance--though I don't sure how that could be built into the model.
Top
Locked
104 posts

Return to “Group Build 10: Between the Wars”