its been 2 years after i moved to my new home, infortunatly the airfield diorama i built for photographing finished builds didnt survive the move.
the only thing that survived was the large hangar that i managed to save.

however, i have been working on a plan to build a new diorma in a 30mm x 45 mm plank.
one of the features will be a soviet style hardened aircraft shelter, based on Kazama's Polish Air Base (see: http://www.kampfgruppe144.com/phpBB3/vi ... hp?f=9&t=9)

i have already designed the shelter, but now im looking at designing a similar style control tower.
im thinking of building something like the Peenemunde control tower, used by the former East-German Air Force.

however, with the limited dimensions, on the board, im thinking of maybe designing a smaller version of this building.
i will most some early design drawings later

preliminary design work on the shelter.
been pre-drawing brick placement, best results will be from the placement on the left.
the shelters opening will be about 65mm high, 130mm wide and 170mm deep. large enough to accomodate a Mig-25 or Su-27.

i have another smaller plank (30cm x 30cm) that could be used dor an extra shelter of the same design. more supplies arrived today :mellow:
this time, the cars and trucks (from AliExpress). while the inside parts for the shelter are drying, ive started cutting plastic for the control tower building.
earlier this week, the last parts for the scenery arrived, the trees that will go in the backdrop. work has begun, started with the painting of the concrete.
lines will be added to simulate PAG-14 concrete plates. 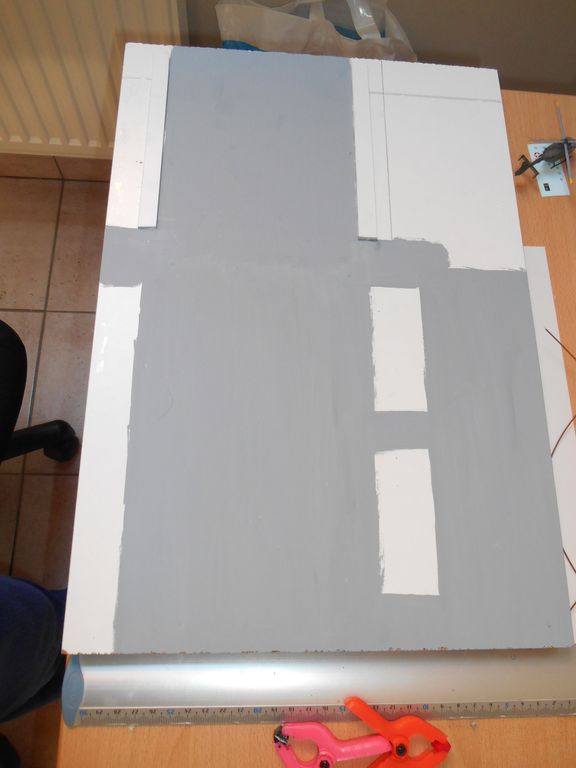 the inside of the shelter has been primed last night. 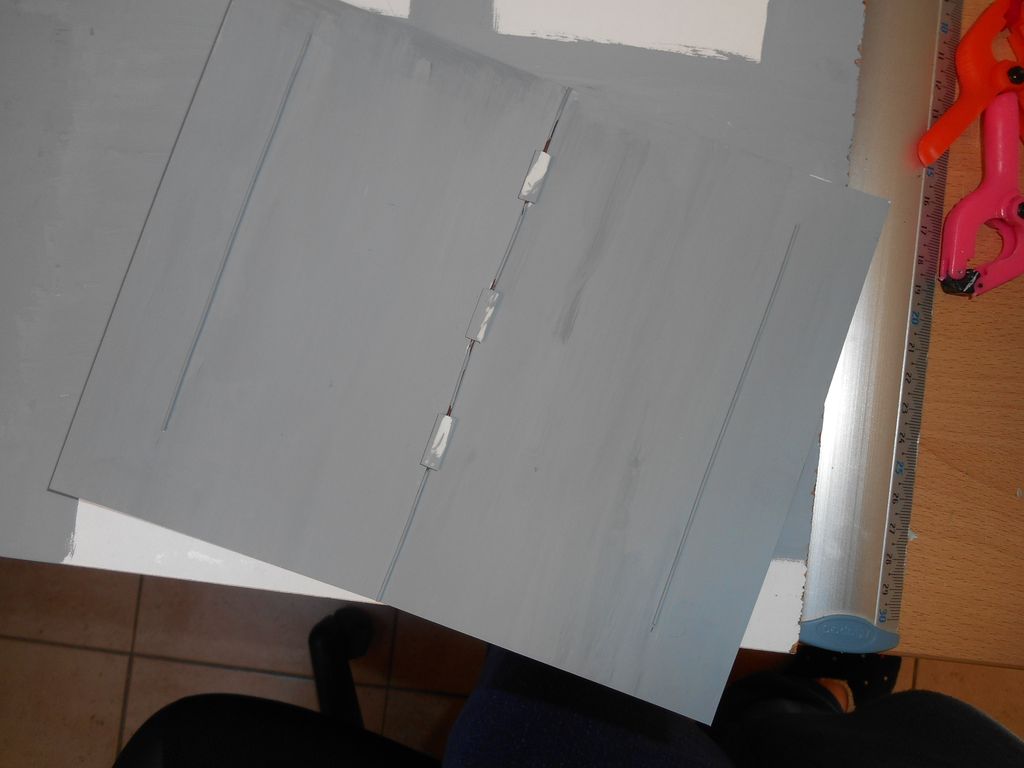 front of the shelter exteriour and the rear of the interiour are also painted. 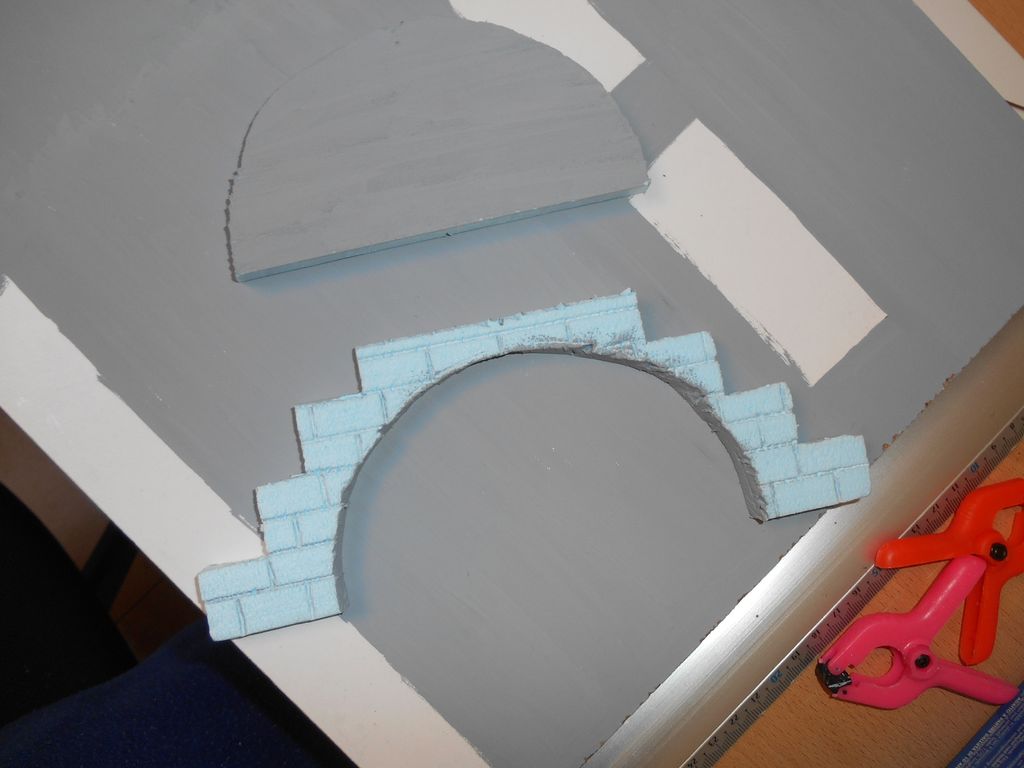 construction of the hangar has begun: 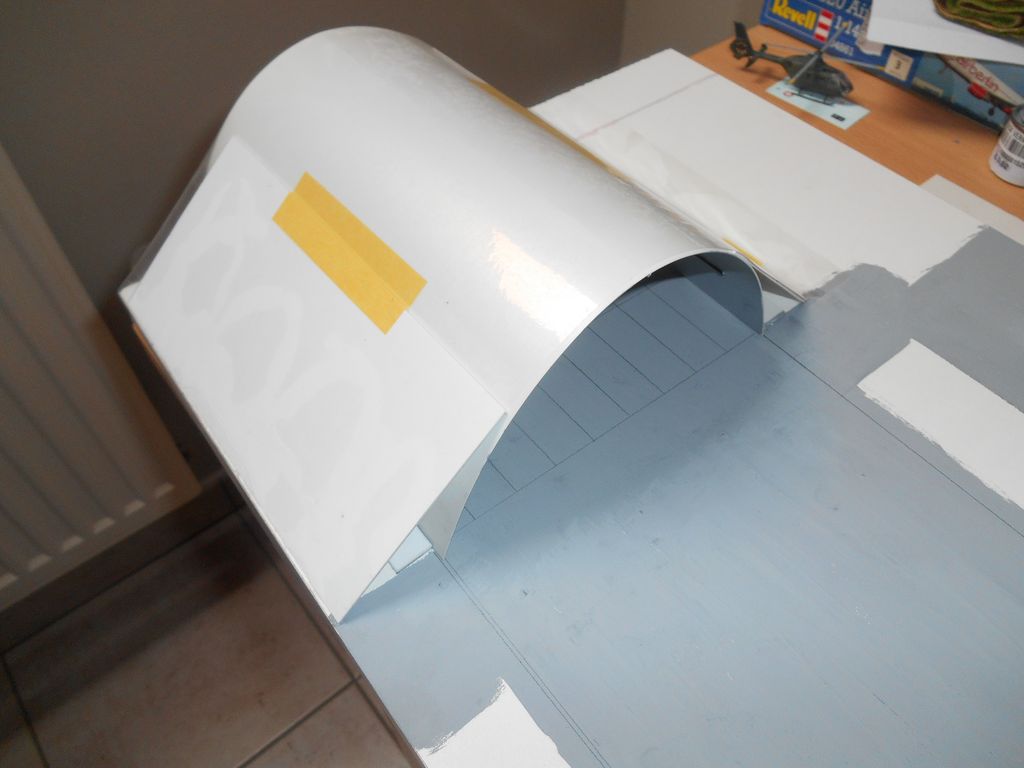 inside has been paved (drawn off) with PAG-14 concrete plates, here's a test alpha jet for size comparison. 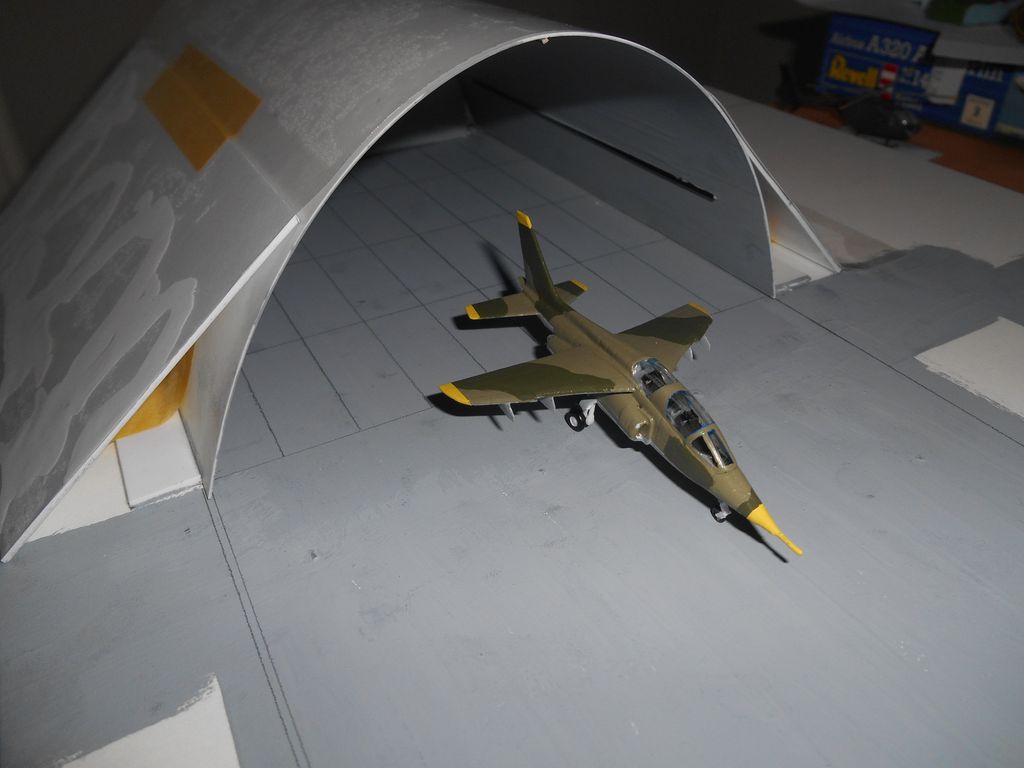 also, construction has begun on the main building, still needs painting and detailing. 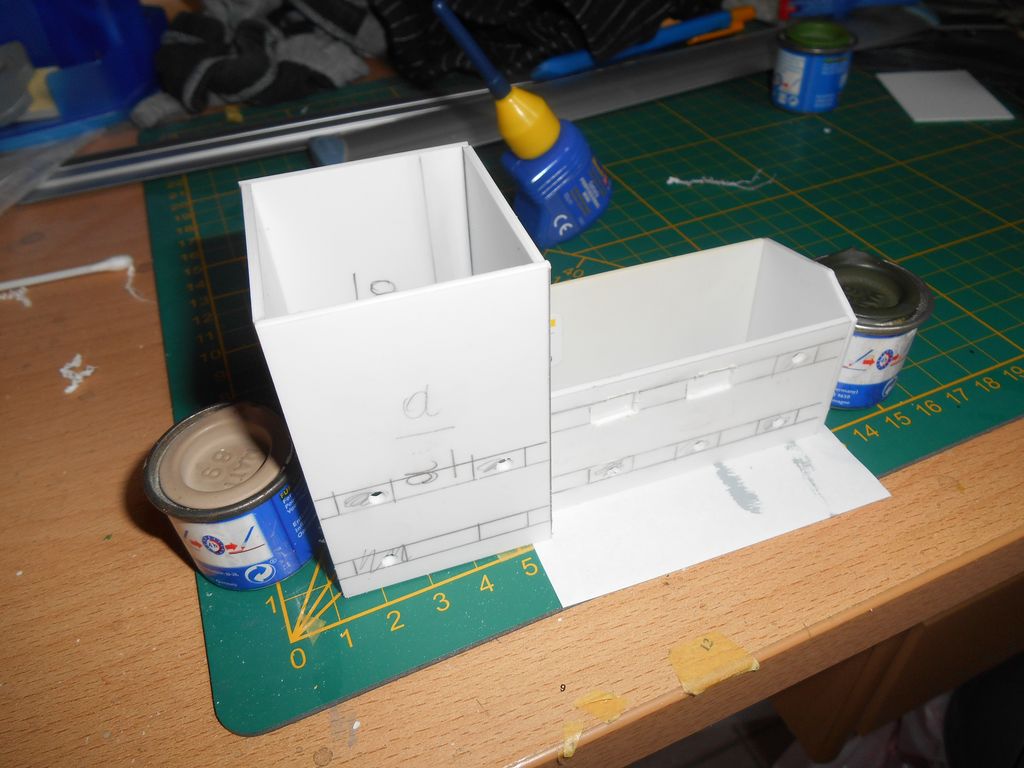 last night, the construction of the control tower building was mostly completed.
the window construction is not yet fitted as thats still in the painting/drying process.

the hangar is about 90% complete, i still need to close up a few holes though.
i also noted that the paint was slightly chipped on the top, so iwill need to touch that up. 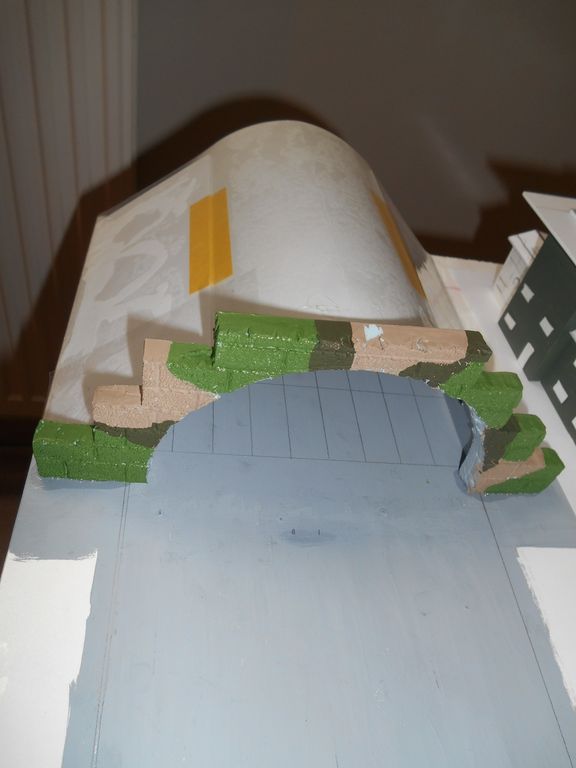 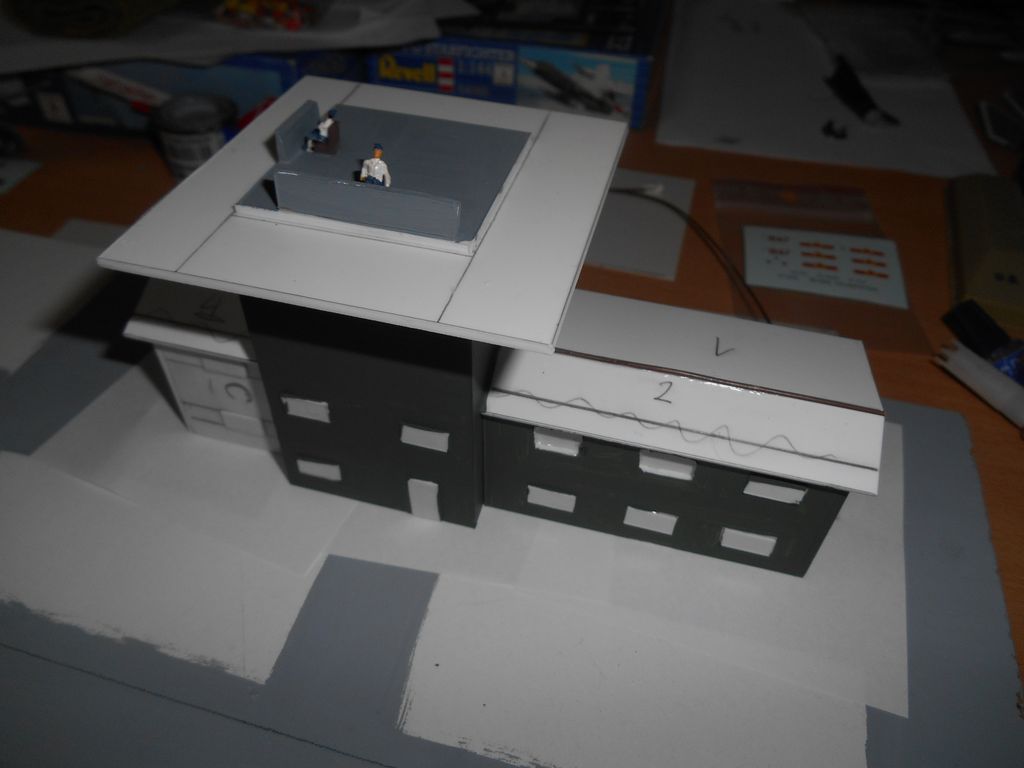 this morning, the colors were added, with the glueing of the grass matts.
as you can see in the picture bellow, the scenery is starting to take shape. i also started drilling holes to plant the trees.
cars and personel will be added as soon as the main constructionwork is done. 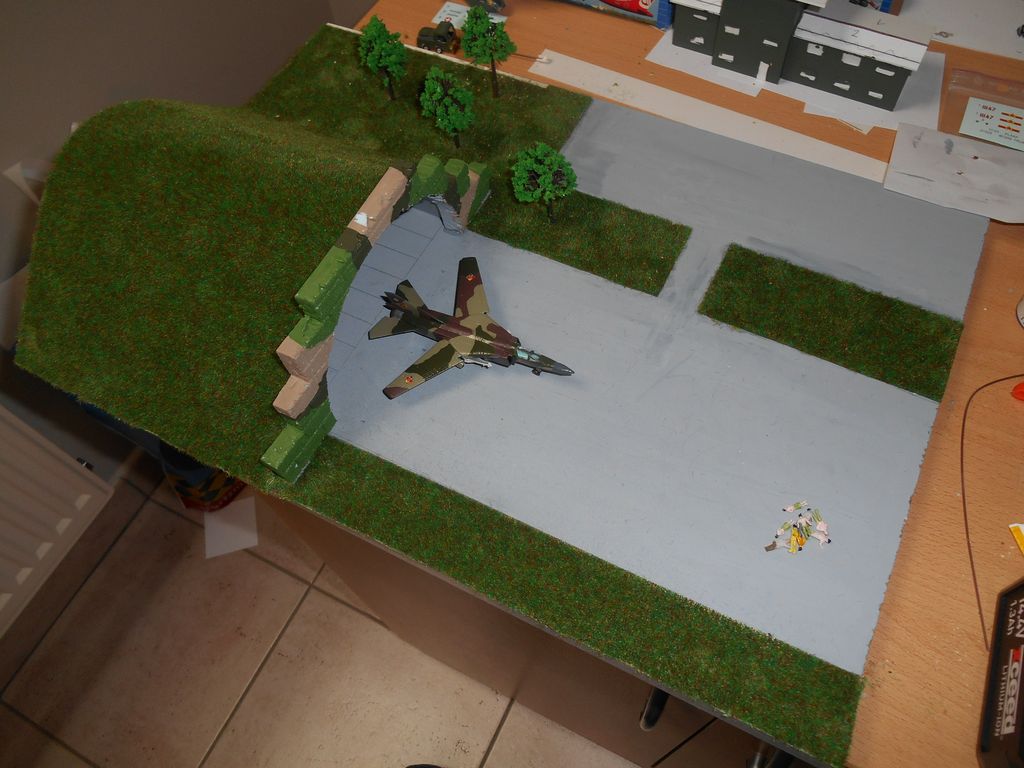 You are working very hard, that is taking shape very quickly!
Top

I am envious of how much you are getting done with each passing day. I'm on Day 3 purely stuffing around with the underbelly tank of my Kingcobra!