For the discussion of aviation and aircraft subjects. If it flies, it goes here!
Post Reply
55 posts

So I discovered that I have quite a few combat or assault gliders so thought I'd start a rolling WIP thread which may encourage me to build them all. Gliders not really being my thing I can see these sort of falling by the wayside otherwise… By my count I have the following:

I have just finished the Bowlus XCG-7. Quite a simple build but satisfying to add little details to it. The XCG-7 was an 8-man combat assault glider which failed structural testing at Wright Field in February 1942 and never entered production. In itself not a riveting subject, granted, but a starting point.

The Anigrand kit is a bonus accompaniment to the B-17C/D etc. box. Very simple kit, but well thought through with the single-piece wing.

After initial bath, I got straight to work putting the fuselage and wings together. There was a small step in the resin so a piece of plasticard was inserted to level it all up. Interior work took very little time and I decided to make the prominent hinges that can be seen on the flaps and tail plane surfaces. This was done with a drill bit and small-grade wire bent to shape.

Then painted the wing walkways and masked them. Canopy was on next and then I gave it a spray with rattle can Humbrol Aluminium (which comes out quite flat, as fitted a doped fabric aircraft). Wheels and then the pitot thing, made out of stretch sprue and spare etch.

All done - on to this curious creature next…

not really my thing either, but interesting the look at all the same. The flying wing thing is quite interesting.

If you find you can't get enough gliders, you might consider converting an Amodel C-123 to an engine-less XG-20 glider
Top

Jonathan wrote:If you find you can't get enough gliders, you might consider converting an Amodel C-123 to an engine-less XG-20 glider

I was thinking that exact thing. Great minds. Well if I find a new calling in life which is to model absolutely, positively every single pre-production glider prototype I may well! I have a feeling, however, that I may be well and truly done with gliders after this! There is also the XCG-17 or whatever the C-47 glider was called - Welsh Models do a conversion for it although for all I can tell you just need to replace the cowlings with a lump. Not sure I can summon the enthusiasm for that. Of course, I still have a C-47 sitting unfinished from the first GB...

Thanks Miguel! The fun is in adding the little details but not a very challenging build, you'r right.
Top

Finally got round to starting the next glider on my list. This is the curious looking General Airborne Transport XCG-16, which evolved from the lifting wing designs of Vincent Burnelli and looks a lot like a manta ray. It was designed to carry 42 troops or, as in the image below, light artillery and jeeps in each bay. 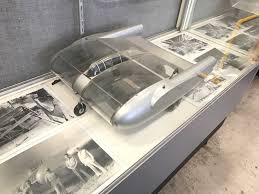 Three were built, one being a half-sized prototype. The first flights in the Army evaluation took place in California in September 1943, but loose ballast caused one of the designs to go into an unrecoverable flatspin on its first trial flight. Something of an inauspicious start. Although the XCG-16 eventually proved itself an effective glider with good handling characteristics, it fell short of the army's requirements. Retromechanix has the original Army report, which states the glider was too heavy, fully loaded, to be towed by the C-47 and the cargo compartments were too small to carry a useful tactical load. It was, interestingly, such a clean design that the range of glider+towplane was significantly increased compared to rivals.

Once the pouring stubs are removed the two fuselage halves together slot together pretty well, with the wings and tail booms going on with only a small seam.

After a bath, the manta ray got its first olive drab coat (still wet).

I spy opportunities for doing a bit more detailing of the undercarriage and the nose area but this should be a pretty quick and painless build as I finish off my Vickers Windsor.

P.s. this is a great picture from the Manta Ray's (yes, the name will stick) cockpit showing a number of glider prototypes at what is I think now Camarillo Airport. I can see the engine-less C-47 (XCG-17) and a few other familiar faces.

Fantastic subject. I love the first one. Very elegant! The second one... it looks like it eats krill.

More progress, pretty agonisingly slow, over the last month. Even with something as weird and wonderful as this I admit I've struggled with enthusiasm for an aircraft lacking guns or engines. Still a child at heart. Anyway, more olive drab paint:

Then the glazing was added and the small gaps around the ramps were filled:

More olive drab and neutral grey, then some wheels. A plastic rod was put at the trailing edge of the main wing because this is quite tail happy.

I used the kit main undercarriage doors but made my own nose wheel door - the kit one looked like it was made with scale scaffolding planks. I also added the retraction rods from stretched sprue.

Next I need to cut off the absurdly large pitots on the wing and replace with something more delicate and breakable. The tow point on the nose needs to be added. A bit more tidying up of the canopy painting and then this is ready for decals. Hoping to get this off the bench by the time the GB starts. This would be completion 5 of 2017 so far!
Top

Gliders are not that well represented in 1/144 so it's great to see these. Excellent work on both, ajmm. The XCG-16 in particular will stand out on the shelves, fugly beast that it is. Agree with Jonathan that a little diorama with a Dakota would be a nice touch. I've still got an FE Resin Go242 stashed away, along with a couple of elderly He111H's and the long-OOP Cathouse He111Z Zwilling conversion. One day ...

I have just ordered the Anigrand Budd C-93/Conestoga and this comes with one of those Bowlus types of glider. I've never had any interest in gliders but I might get tempted by following and learning from this thread.

Users browsing this forum: No registered users and 14 guests